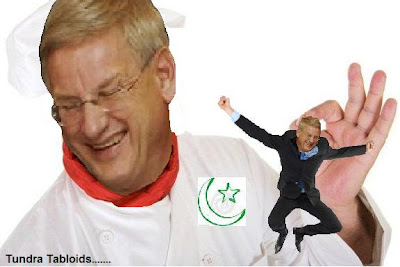 The Swedish anti-Semitic chef:
Just a pinch of me will do it
Thanks to Infidel for the heads up on this article by the editor of Världen idag, that was published the other day at the Wall Street Journal. Yes, the internationally known anti-Semite, Carl Bildt, is back in the news, this time he’s the focus of an op-ed written by a fellow Swede who observes that the National Coalition Foreign Minister finds it more preferable to be in the midst of thugs and tyrants than in J’lem talking with Israeli officials.
According to Mats Tunehag, at a time when the world should be uniting to effectively contain a dangerous Iran, Carl Bildt “seems to have other agendas and the wrong friends.” I agree with the Swedish editor, Bildt is most definately on the wrong page with most of Europe where Iran is concerned, as well as going out of his way to throw Israel under the bus. Glad to see that there are more Swedes of serious ranking coming out and saying the obvious about the anti-Semite Carl Blidt. KGS

I was asked by the Wall Street Journal (WSJ) to write an op-ed on Swedish Foreign Minister Carl Bildt’s dealings with Iran and related Middle East issues. The article is published today, 22 July. Here is the link to the WSJ op-ed. My full text follows; the WSJ version is slightly edited:
Mr. Bildt is a gifted and well connected politician. He has a track record of speaking up against dictatorship even when it was not politically correct. He has also proven himself as a man committed to peace and nation building, including risking his own life during his years in the Balkans.
But Mr. Bildt’s dealings in the wider Middle East region – with dictatorships, and the only democracy, Israel – raise questions and cause concerns.
Last fall, diplomatic tension rose between Sweden and Israel. A Swedish tabloid published centuries old blood libel myths, but Mr. Bildt refused to take a stand against those anti-Semitic accusations. He then cancelled a scheduled trip to Israel, at a time when Sweden held the EU presidency. But he gladly went to Syria in February 2010. Syria, one of the worst dictatorships in the region, occupied neighboring Lebanon for many years, and supports Hezbollah in its Holocaust agenda.
Syria’s dictator Bashar al-Assad hosted president Ahmadinejad at the same time, as well as the leader for Hezbollah and the leader for its twin terrorist organization Hamas. Only bin Laden was missing. Mr. Bildt failed to bring up human rights issues or challenge the fact that Syria supports terrorist organizations.
In short: Bildt doesn’t hesitate to have photo ops with dictators, terrorist supporters and Holocaust deniers, but he refused to visit the only democracy in the region.