Skip to content
Home
/
2010
/
July
/
26
/
howard Dean
/
MORE ON THE SHIRELY SHERROD CASE: FORMER GOV HOWARD DEAN SHOWS HIS STUPIDITY………
Facebook
Twitter
Google+
LinkedIn
Pinterest
The stupidity of the man is staggering. He first blames Fox News for helping to get Shirely Sherrod fired, then after being told that Fox didn’t even mention Sherrod’s name nor ran the video until after the Obama administration fired her, he then claims it doesn’t matter anyway, because, Fox is guilty by association.
These are the morons currently running the US right now, absolutely stunning that such an idiot was even in charge of a state, let alone the DNC. By the way, Andrew Breitbart was correct in his intial reason for running the video he was given showing black racism. It’s irrelevant whether he had’nt been given the whole 45 mins of the tape, his point was that the Dems are hypocritical when it comes to racism on their side.
The second half of the film shows her repudiating her past remarks, then she goes ahead to qualify them with yet more race baiting and racism. No, Breitbart got it right, and Howard Dean is a complete moron, whose biggest challenge of the day is trying get his feet to find the floor after waking up, he normally just hits the wall then slides down. KGS 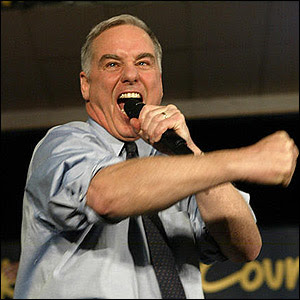 Howard Dean: Stupidity, yes I can!