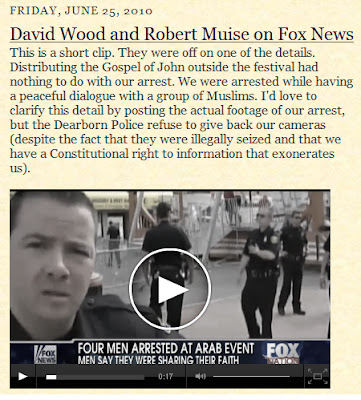 These officers are in deep, up to their eyebrows. The Tundra Tabloids reported earlier on the four Christian evangelists being arrested on a public city street in Dearborn Michigan, a city where the TT once worked. Obviously since that time the city has been taken over by sharia supporting Muslims, so much so that it’s affected the entire police department. Here is the link to the Baron’s post which got me started on this issue again, which led me to Answering Islam, here and here. KGS

Free Speech or Breach of Peace?

THE BARON HAS MORE: In Saudi Arabia the mutaween — more properly known as the Commission for the Promotion of Virtue and the Prevention of Vice — are the religious police. Their job is to keep an eye on the citizenry and enforce the strict Wahhabist version of sharia that functions as the law of the land in the kingdom of Saudi Arabia. One of their more infamous deeds was to force a group of schoolgirls back inside their burning building because they were not properly veiled. Better to burn to death than to shamelessly expose their flesh!

At last weekend’s Arab International Festival in Dearborn, Michigan, a combination of the Dearborn police and private security cops acted as the mutaween for the Arabs of Dearborn. It seems that four blasphemous Christians — Nabeel Qureshi, David Wood, Paul Rezkalla, and Negeen Mayel — had the effrontery to proclaim their faith on the public sidewalk outside the festival, and all four were arrested for “breaching the peace” of Dearborn.

I heard about this disgraceful incident a week ago. I’ve been waiting for the confiscated video footage to appear so that I could post a full account of what happened, but the police have not as yet returned the cameras taken from the people they arrested. The video below — which shows the moments immediately prior to the arrest — was evidently not among the confiscated materials:

It’s important to realize that these cops were enforcing the law against defamation of Islam as prescribed by sharia. Anyone who proclaims a faith other than Islam to a Muslim is guilty of slander or defamation of Islam. However — and this is important — this law applies only within Dar al-Islam, territory that is under the rule of Islam.

In other words, the Arabs of Dearborn have declared their sidewalks to be official Islamic territory, and the Dearborn police are the de facto enforcers of sharia law in that territory.