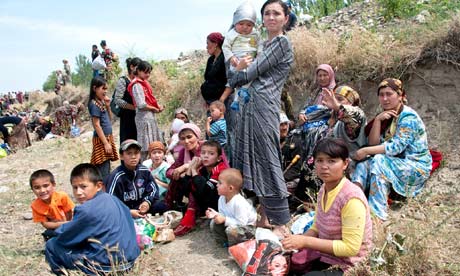 The ethnic cleansing of the Uzbeks is almost complete, and the humanitarian need is great, but yet no cry in the streets by the hypocritical Left are heard over the need to boycott the Kyrgyzstan regime.
You see folks, this is what “ethnic cleansing” actually looks like, something of which the Leftist loons and their minions keeps charging Israel with, just because a few Jews want to build a home in their ancestral homeland. The hypocrisy of the Left is all too clear in situations like this, I wouldn’t be surprised if they try to pin the blame for the current unrest between these two groups on the Jews. KGS

Food is in short supply. Army is monitoring the limited sale of basic foodstuffs like vegetables, bread and butter. Tens of thousands of people have fled their homes; many set on fire. Others are living without shelter or food, sleeping on the road. Violence could reignite at any moment.
Bishkek (AsiaNews/Agencies) – Kyrgyzstan is the scene of an “immense crisis”, the Red Cross (ICRC) said. Refugees are short of basic supplies such as food, water and shelter. People live in great uncertainty, fearful of violence that could break out at any moment.
The number of displaced people ranges “from several hundred to several thousand in number,” the ICRC’s Severine Chappaz said. Many families also have no news about missing members.
The Kyrgyz army has retaken control of the city of Osh with troops patrolling the streets. An uneasy calm has descended upon the area and a sense of foreboding hangs in the air.
A truce has allowed the ICRC to reach the riot-affected area, which had been cut off from the outside world for several days.
Officially, at least 200,000 people fled their homes, an estimate deemed low. Some 75,000 ethnic Uzbeks have fled across the border into Uzbekistan. Many are housed in temporary shelters, but the fate of many others is still unknown.
Other refugees are stuck at the border after Uzbek authorities ordered it closed. They lack food and shelter, and entire families, children included, are sleeping on the road, in the open air. Some have had their home torched. Everyone is afraid that violence might flare up again; no one wants to go back.
More here.