The Tundra Tabloids was sent this article by Reinhard which happens to be one of the better examples of what the international media should be doing: investigating the people on board the Mavi Marmara and their connections to the Turkish government.
Yes the Israelis botched the boarding of the ship -most likely believing the Turkish government’s assurances that there would not be any serious armed resistance to the enforcing of the blockade- but a botched boarding does not make it an illegal effort.
The left-wing media is doing its best to hide all of this from the average citizen, and even here in Finland, on YLE news, they ran a report that categorically rejected the Israelis’ record of the events, in spite of all the evidence known already.
All the videos showing jihadis arming themselves, all the evidence showing maritime law allows for the boarding of a vessel trying to run a blockade, is not good enough for these idiots. No, these morons choose instead to run with the Islamonazi line and demand an investigation of Israel.
The Tundra Tabloids views all of these morons with contempt. KGS 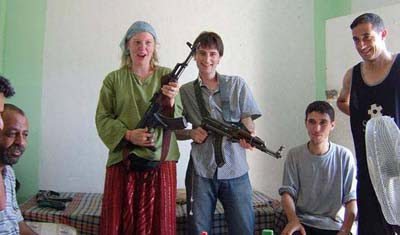 Other Swedish ‘humanitarians’ posing
with jihadis and theirKalashnikovs

The Ship to Gaza sullies the rainbow

Jew hatred is prevalent in much of the Muslim world. Not infrequently, anti-Semitism that most closely resembles the state ideology. It is sometimes the result of what the surface looks like aid to Palestine is in fact disguised campaigning against the Jews. Those who really want to support the Palestinians should therefore carefully choose his company.
Swedes on the Ship to Gaza are trying to downplay the purely anti-Semitic elements of the convoy which recently running into Gaza. It is emphasized that the Ship to Gaza is politically independent and is part of a “Rainbow Coalition”, as they call it.
But it has sullied the rainbow.
Daily News has published an opinion piece by student Patrik Öhberg, where the main funders of the flotilla are interviewed.

You look further east is another organization with a major financial role. It is called the Perdana Global Peace Organization, it’s based in Malaysia and has financed the days of the current boat “Rachel Corrie”. Perdana led by Malaysia’s controversial EX Mahathir Mohamed, who never hesitated to speak his mind, especially about Jews. When Mohammed began the OIC meeting in Malaysia in October 2003, he made a notorious statement about the Jewish conspiracy:
“The Europeans killed six million Jews out of twelve, but today the Jews control the world by proxy. They get others to fight and die for them. They invented socialism, communism, human rights and democracy so that it would not go to persecute them and to enjoy equality. “(Asia Times 23 / 10 -03)
The statement brought an outcry, of course, but that has not stopped Mahathir Mohamed from repeating his view of Jewish conspiracies. As recently as January of this year came a new statement in which Mohammed expresses that the Holocaust was a failure because the Jews are still a major problem (Malyasia Today 21 / 1).

Ship to Gaza’s Stellan Vint Hagen, however, waving away this one in response .
Of course, we take the Liberty Flotilla away from anti-Semitism, but we operate under the same rules as other humanitarian organizations and are not in the habit of checking individual donors’ political views.
But the financiers’ political views now are not playing the role, so participants should at least do that. With the boat on Rachel Corrie was Matthias Chang Wen Chieh, who In Gaza highlights that:

“Lawyer for 32 years served as political secretary for the fourth Malaysian Prime Minister Tun Dr Mahathir Mohamad. He is the author of three bestselling books,” Future Fast Forward “,” Brainwashed for War, Programmed to Kill “and” The Shadow Money Lenders & the Global Financial Tsunami “, published in the U.S. and in Malaysia.”

What In Gaza do not tell is that Matthias Chang Wen Chieh titles have been speaking in headlines as “The Zionist Agenda Global War” or “The Zionist Anglo-American Empire Meltdown” …
In 2006, Matthias Chang Wen Chieh meeting in Iran “Review of the Holocaust: Global Vision Conference”, that is, in Mahmoud Ahmadinejad’s conference of Holocaust deniers. Chang gave a speech, which is available at Chang’s own website , where he said it was the Jews who attacked Hitler’s Germany.

“23. There is an arguable legal case for the proposition That Germany, faced with a Zionist Declaration of War in the early 1930s, begged the Right to Defend Itself Against the Zionists’ agenda to Annihilate Germany and her Citizens!
24. Critics may well counter-argue that the above proposition is ridiculous – how could Zionists, not constituting a nation state declare war on Germany? My reply is simple. If Al Qaeda [and the “Jihadists”] can be accused of declaring war on America and which gave rise to the present Global War on Terror, the World Jewish Congress and allied organisations can likewise be accused for their crimes against Germany!”

Chang concluded his speech by presenting measures for the future, where one of the items was to tear up the judges from Nurnberg.

“2. We must set up an International Commission of Jurists to review the findings of the Nuremberg Military Tribunal.”

It is understandable that the Ship to Gaza does not want to talk about the close ties to the hatred of Jews. They are of course afraid that their noble purpose will seem dubious.
But not with the best intention in the world can you call this a Rainbow Coalition. It is as close to pure Nazism as one can get.
The flotilla was finansed by Jew-haters. The fact that Ship to Gaza is running their errands – without even showing any signs of shame – is disgusting.