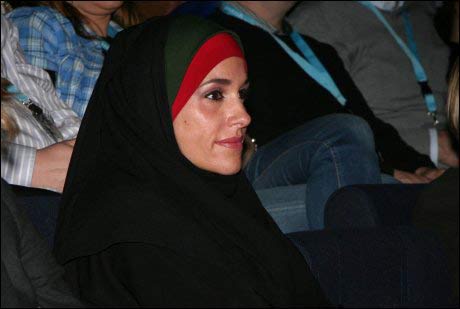 Nor-vegan jihadi Marjam Salvesen Bhatti:
I view the jihad as Mohamed described it
The struggle to keep jihad as just an “inner struggle”, always proves to be, in the long run, just too difficult of a task for many a Mohammedan. Once in touch with their “inner Mohamed”, their inner struggle takes on new meaning and they just got to show it to everyone. KGS
H/T: Esther

Arfan Q. Bhatti has the distinction of being Norway’s first terrorism suspect. His wife, Marjam Salvesen Bhatti, now runs a Jihadist website, much like Malika el-Aroud, the “mother of al-Qaeda in Europe”.
I will honor Palestinian, Chechen and other Muslim women who contribute as freedom fighters in the resistance struggle,” says Marjam Salvesen Bhatti.
On Facebook the Trondheim woman established a forum for promoting Jihad, where she publicized a series of pictures of female Jihadists with guns and suicide bombs.

Adresseavisen reports that Marjam Salvesen Bhatti, the wife of synagogue-shooter Arfan Q.Bhatti, runs a Facebook-page dedicated to lauding female suicide-bombers. Unauthorized translation from Adresseavisen:
On Facebook the Trondheims-woman has set up a forum for the furthering of Jihad where she has published an array of pictures of female jihadis with firearms and suicide-bombs. For Marjam the term jihad is not negative, but a duty for her as a muslim, she says.