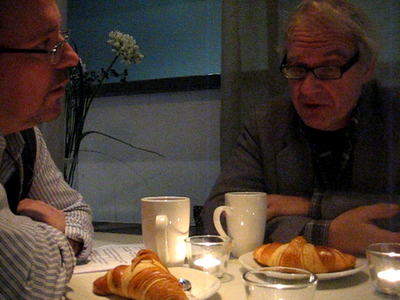 Tundra Tabloids and Lars Vilks in Stockholm (2008)
Lars Vilks is being ‘dogged’ by the Muslims ever since he published the picture of Mohamed as a roundabout dog a few years ago. He has since then had Jihad Janes come after him as well as being head butted by a real angry butt head of a Muslim who was outraged over his showing pictures of a gay Mohamed at Uppsala University.
Now he has had to cut short his stay in Finland where he was completing a contemporary work for the art festival at Ii Finland. He may not have won this round, but Mr.Vilks is certainly not out of the fight. KGS

The concept of Swedish artist Lars Vilks at the Ii art festival is prematurely going back to its homeland. Vilks left the country as a precautionary measure because the public has been informed in advance of his participation in the arts festival opening ceremony.
Vilks arrived in North Ostrobothnia Ii a week ago to build a space of art Art Ii-arts festivals.
Muslim extremists have repeatedly threatened the artist who appeared in Ii, while behind a pseudonym of Lauri Vilkas. His real identity was supposed to be published as a surprise at the opening of the art celebration on Saturday evening, but the media already reported the information in the past few days.