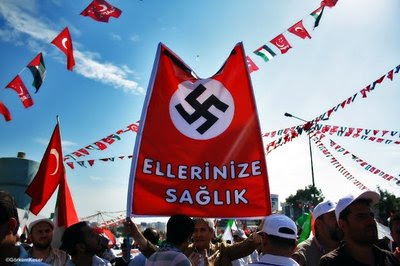 The Turks are awash in Islamic fundamentalism and Leftist Neo-Fascism, they all hate Jews, Israel and the West, and as the Tundra Tabloids reported earlier, the Grey Wolves, a Turkish Neo-Fascist group was on board the Mavi Marama. The Left, which means the Neo-Communists and the Neo-Fascists have made an alliance for all to see.
Only the willfully blind (moderate Leftists) refuse to see it. Time to end the charade and start calling things as they are, the Tundra Tabloids, as well as others, have been doing just that. It’s time for the media who reads these posts (you know who you are) to start addressing this alliance and start investigating it. KGS

Document.NO: The Islamist Saad party held a large anti-Israeli demonstration in Istanbul on Saturday. This image comes from Armenian sources. International agencies seem not to emphasize the darker aspects of the Islamists. Is it because of their power?
The swastika can wave during a public demonstration says a lot about the protesters, organizers, but also society and the political elite. This indicates acceptance.
“On June 5, at a demonstration organized in Istanbul by the Islamic Saadet Party, one of the banners read, in Turkish: “Legendary leader Hitler, our patience is running out, we need your spirit.” The incident was just one of countless anti-Semitic statements, slogans, and banners made during rallies in Turkey after the Israeli attack on the flotilla of ships attempting to break the blockade on Gaza.”