The Tundra Tabloids captures the Israeli ambassador, Avi Granot, taking this picture the ends up in Ynet. 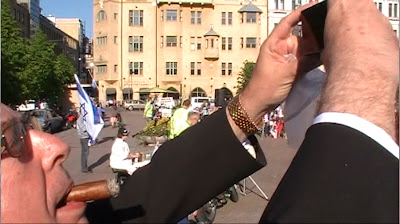 Ambassador Avi Granot: “To see all the Israeli flags being waved and the thousands of people marching was very heart-warming,”

Yes it was Mr.Ambassador, in deed it was. KGS

Then there was this guy, a Somali who was at the time the TT came on to the scene, was busy labeling Israelis as murders to the officer on his left.

The Tundra Tabloids then asked the guy whether he has something against Jews, he said: “Yeah, you killed my f*cking prophet”. Shocker, no peace be upon him from this guy, who is apparently a secular Muslim, but nonetheless, has it in for Jews.

He complains that I’m filming him, demands that I be given a ticket then comes over to threaten me with some of his bodily fluids. It’s another fine example of the “religion of peace” in action, though most likely not a strict follower, he still has enough violent thoughts towards Jews from his early days of influence in the mosques.