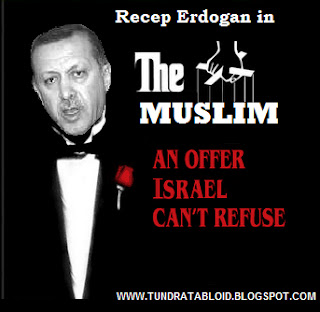 And the media played along. How predictable was that? Like the Tundra Tabloids has been saying for some time now, Turkey is reasserting its place within the Islamic world. At least for the moment, it looks like they have gaind some momentum in their plans, but outside of the fact that a Turk heads the Organization of the Islamic Confrence (OIC) the Arabs are not keen on being subservient to the Turks anymore than they are keen to playing second fiddle to the Iranians. KGS
NOTE: It’s not that unreasonable to believe, given Erdogan’s latest outrageus behavior, that Turkey could unilaterally bring back the caliphate into existence.

Turkey is calling for a jihad against Israel

Support for Turkey is at an all-time high in the Arab world. The last time Turkish flags were carried through the streets of Middle Eastern capitals was during the first world war, as people took to the streets in continued support for the Ottoman sultan-caliph against the western entente powers. The sultan-caliph had proclaimed a jihad. Thanks to Turkish government support of a blockade-running mission led by a group of Hamas sympathisers, they are flying once again. No ruling Arab leader is as popular as the Turkish prime minister, Recep Tayyip Erdogan, whose discourse amounts to calls for a jihad against Israel.
Israel’s relations with Ankara – military, economic, and tourist (Israelis once flocked to Turkey) – have been sacrificed on the altar of Turkey’s retrograde aspiration to lead the Islamic world and establish itself along with Iran as an alternative to American power. Turkey is once again turning eastwards.
The Erdogan government’s outrageous provocation of Israel could have been prevented. Israel begged the Turkish government not to let the Mava Marmaris depart with its meagre cargo of humanitarian aid (meagre compared to the aid Israel facilitates every day) and Islamist extremists armed to the teeth with clubs, wrist rockets that fire deadly projectiles, switchblades and military-style night vision equipment.
The provocation is all the more shameful since the Turkish government has proclaimed that all passengers were checked thoroughly. Is this the behaviour of a friendly country? Of the six ships, only the Turkish ship resisted violently; all the others were boarded without incident.
But the gall of Erdogan and his foreign minister Ahmet Davutoglu knows no bounds. Erdogan’s bellicose exhortations were beyond belief. “The heart of humanity has taken one of her heaviest wounds in history,” he cried. “Bloody massacre” … “spilling the blood of innocent humans” … “in the history of humanity this has been recorded as a major shame” … “a despicably cowardly and vicious act.” Turkey, unlike Israel, bellowed Erdogan, is not an “adolescent, rootless state”. “As precious as Turkey’s partnership is, so harsh will be her hostility.” He concluded, no less: “Today is a turning point in history … Nothing will ever be the same again.”
While Erdogan was engaged in war-mongering, Davutoglu was urging the west to drop sanctions against Iran. He next expressed his “disappointment” that the US had not condemned the Israeli raid, which he termed “murder conducted by a state”. (In contrast, the sinking of a South Korean ship in May by North Korea, killing 46 sailors, was of “great concern” to the Turkish foreign ministry.)
It is difficult to imagine that Turkey would be engaging in this kind of behaviour were the US demonstrating world leadership and not abandoning the field to the likes of Erdogan. While the administration works to assure Israel’s security with co-operation on missile defence, it has yet emboldened Israel’s enemies by publicly pressuring Jerusalem at every turn, not taking decisive action against Iran, and caving to Egypt by singling out Israel – to the exclusion of Iran – at the nuclear non-proliferation treaty review conference last month. Post-conference palliatives offered up by US officials did little to ameliorate the impression in the region that the US was hanging Israel out to dry. Turkey was simply bandwagoning.
Israel will now be closely examining its relationship with Turkey. Turkish Jews are afraid to leave their homes. Israel has withdrawn the families of its diplomats out of fear for their safety. Israel has excellent relations with the armed forces of Turkey, but they have had their wings clipped by the massive assault against them in the murky episode known as Ergenekon, in which several military officers and others are accused of trying to overthrow Erdogan’s party.
Turkey’s over-the-top behaviour has Israelis scratching their heads. How would Ankara react, for instance, if Israeli “humanitarian organisations” decided to run aid missions to the terrorist PKK, the Kurdish separatist group in Turkey? Do the Turks really want an Iranian port on the Mediterranean in Gaza? And for that matter, do the western countries, which have so roundly castigated Israel?
There may be an international commission of inquiry into the incident. An unbiased commission must certainly also examine the possible complicity of the Turkish authorities in arming the militants.
There is still hope for Turkey. While old-style Kemalism probably needs to be revamped, the person to do it just might be Kemal Kilicdaroglu, the newly elected head of the Republican People’s party (CHP). As the Washington Institute’s Soner Cagaptay notes in the Jerusalem Post, he could bring about a “New Kemalism – Kemalism 2.0 – [which] would be updated and recast to preserve the liberal aspects of a Kemalist polity, while jettisoning authoritarianism and anachronistic aspects of traditional Kemalism.”
Spurned by the EU, where it has applied for membership and ruled by an Islamist party with delusions of grandeur, Turkey is determined to lead the Muslim world once more and is promoting a clash of civilisations in order to compete strategically with the US. Turkey is no longer a friend, but not yet an enemy of the US. It is a “frenemy,” writes Steven Cook of the Council on Foreign Relations. Let’s hope that Ankara’s Islamist rulers pull back from the brink represented by its risky and irresponsible policies.