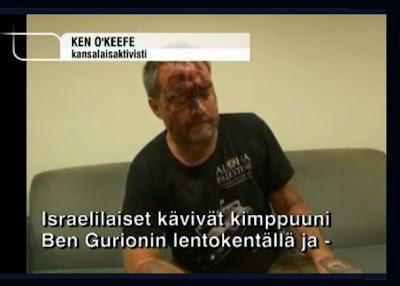 Ken “no to state sovereignty” O’Keefe:
The Israelis attacked me at Ben Gurion airport
Kenneth O’Keefe is a far Leftist/anarchist loon who gave up his American citizenship, and who doesn’t believe in international borders. He has been arrested on a number of occasions for violating one law or another in his zany quest to rid the world of independent sovereign states.
That should come as a surprise to the overwhelming majority of Finns (99.9%) who favor an independent sovereign state of Finland, that their state tv broadcaster, YLE, would choose to run propaganda from a man who holds such radical far-Left views, just because he’s aiming it at the Jewish state of Israel.

O’Keefe has it in for the Jewish state with a vengeance, the man refuses to acknowledge its borders, he violates them, gets sent to the pokey, then deported and lives the life in his small circle of fellow activists as a “cause célèbre “, a hero. This of course remains unknown to the average Finn who viewed last night’s broadcast in which O’Keefe is parading himself in Turkey all bloodied up due to the evil Israelis.
The guy’s a con artist, a manipulator of the facts like the rest who belong to his special little tribe of lunatic Lefties. And as long as his/their message dovetails with the Finnish Leftist media agenda to demonize Israel, YLE will give him front and center stage.Yes YLE labeled him as an “activist”, but not as a hard Left radical activist that he actually is. So for every Finn who viewed the broadcast last night 5.6.2010, Ken O’Keefe is just “another activist”, not the hard core paid professional activist that he really is.