Skip to content
Home
/
2010
/
June
/
1
/
BBC
/
BBC ATTACKED BY MUSLIMS IN MANCHESTER FOR TRYING TO REPORT THE FLOTILLA OF THE HUNS STORY CORRECTLY…….
Facebook
Twitter
Google+
LinkedIn
Pinterest
This is what happens when a Western news station -with lots of Muslims in the area- tries to be fair in its reporting on Israel, the Muslims riot and smash the building to get the dhimmis’ minds right. KGS 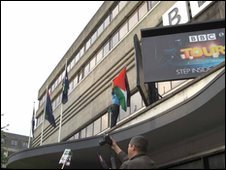 Protesters demonstrating against the Israeli attack on a Gaza-bound aid ship have attempted to storm the BBC in Manchester.

More than 800 people marched through the city centre and down Oxford Road, where the crowd surged at the BBC’s entrance, smashing its front doors.

One man climbed to the top of the building to plant a Palestinian flag and there were at least three arrests.

Protesters said they were also angry about the BBC’s coverage of Israel.

Police officers formed a chain across the BBC’s Oxford Road entrance and surrounded the building with police vehicles and officers.

Protesters from the Palestinian Solidarity Campaign, who organised the demonstration, chanted slogans including: “BBC tell the truth.”

Protesters smashed glass doors and there were at least three arrests The demonstration followed the confirmed killings of nine humanitarian aid workers by Israeli soldiers, who stormed their ship as it approached Gaza.

Talat Ali, 40, organizer from the Palestine Solidarity Campaign said: “This is a peaceful demonstration against the attack that has taken place on the Gaza flotilla.

“We are not happy with the way commanders boarded vessels and butchered people.

“We are not happy with the biased news given by the BBC.”

A BBC spokesman said: “‘There was a protest outside the offices of BBC Manchester, however staff and visitors were safe and services were not interrupted.”