Skip to content
Home
/
2010
/
May
/
31
/
Gaza Flotilla
/
TURKISH IHH WHICH PARTICIPATED IN THE ‘FLOTILLA OF THE HUNS’ HAS LINKS TO TERROR…….
Facebook
Twitter
Google+
LinkedIn
Pinterest
The IHH supported terrorist groups operating in Bosnia (read= Al-Qaida) and has links to terrorist groups in Iraq and in Iran. These are kind of people riding on the ships to help with PR for the genocidal Hamas. KGS

UPDATE: More on the IHH:

[In practice, besides its legitimate humanitarian activities, (humanitarian gangsters is an oxymoron) IHH supports radical Islamic terrorist networks. In recent years it has prominently supported Hamas (through the Union of Good). In addition, the ITIC has reliable information that in the past IHH provided logistical support and funding to global jihad networks. ]
International Humanitaire Hilfsorganization

This pseudo “humanitarian” deserves a cell reserved just for him in GITMO.

From the Intelligence and Terrorism Information Center:

1. Prominent among the coalition organizations participating in the aid flotilla scheduled to arrive in the Gaza Strip is the Turkish IHH (Insani Yardim Vakfi, IHH, “humanitarian relief fund”). It is a radical Islamic organization, established in 1992 by a member of the Turkish Refah Party and formally registered in Istanbul in 1995.
2. As far back as 1996, it was identified by the CIA as a radical Islamic humanitarian organization named International Humanitaire Hilfsorganization (IHH) a.k.a International Humanitarian Relief Organization, with its main offices in Zagreb and Sarajevo and headquarters in Germany. The CIA report noted that the organization had connections with extremist groups in Iran and Algeria.
3. The January 1996 CIA report entitled International Islamic NGOs and Links to Terrorism was declassified by the American administration after the September 2001 attacks for use in the government trials of captured Al Qaeda members. The report mentions a large number of Islamic organizations affiliated with radical Islamic groups.
4. The report deals with the charities and their involvement in terrorism during the conflict in Bosnia, where aiding Muslims in distress was an Islamic religious duty. Islamic activists dominate the leadership of the largest charities, and prominent members of some smaller organizations have been identified as extremists. The main objectives of the organizations include proselytizing, helping the needy and defending Muslim communities. Where Muslims are engaged in armed conflict, some Islamic organizations provide military aid as part of a “humanitarian” package.
5. All the major and most of the minor Islamic charities were significant players in the former Yugoslavia, particularly in aiding Bosnian Muslims. Their contributions represented a significant proportion of the humanitarian aid received. According to the US embassy in Riyadh, Saudi nationals alone gave $150 million through Islamic NGOs in 1994. Most of the offices of NGOs active in Bosnia are located in Zagreb, Sarajevo, Zenica, and Tuzla. Their field of operations appears to be confined to the Muslim areas in the northeastern and central parts of the country.
6. The CIA report identified International Humanitaire Hilfsorganization (IHH) as part of 15 organizations employing members or otherwise facilitating the activities of terrorist groups operating in Bosnia. Some Islamic NGOs not included in the list have terrorist connections outside of the Balkans.
7. Some of the charities mentioned in the report were designated by the United States as terrorist organizations after the 1998 embassy bombings in Africa, while the majority were designated only after 9/11.
8. IHH is not designated by the USA and was designated by Israel only in 2008 because of its connections with Hamas and its fronts within the Union of Good umbrella organization, which, along with its 36 affiliated associations, was outlawed by Israel. 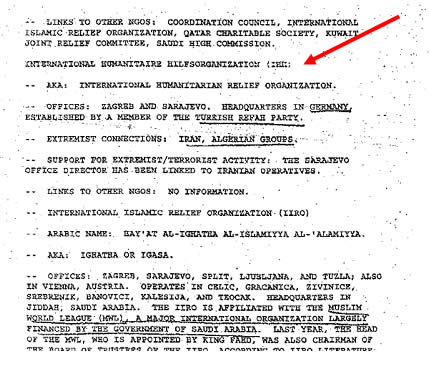