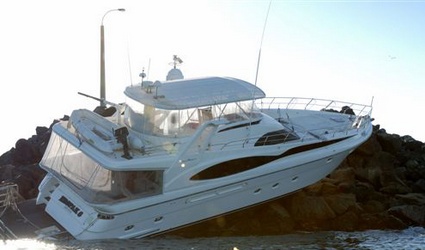 Flotilla News: According to a Foreign Ministry press release, participants on the flotilla were recorded shouting:

“Khaybar Khaybar ya yahud, Jaish Muhammad saya’ud,” which means ‘Jews, remember Khyabar, the army of Mohammed is returning.’ This cry relates to an event in the seventh century when Muslims massacred and expelled Jews from the town of Khaybar, in modern-day Saudi Arabia.
Deputy Foreign Minister Danny Ayalon not amused:

“The anti-Semitic chants voiced by the activists on board earlier in the day showed the “real motivation” for the campaign, which he termed an “armada of hate.”
“Israel condemns the anti-Semitic chants that were publicized this morning,” Ayalon said. “This amply demonstrates that many are not against a particular policy of the Israeli government, but have very real and dangerous hatred for Jews and the Jewish State.”
He further noted that “the main organizer of the flotilla is an extremist Islamic organization with ties to Hamas and global Jihad and it is unfortunate that there are those who are duped into thinking that this exercise has anything to do with humanitarianism or human rights.”
The organizers of the protest flotilla said the ships were set to arrive in Israeli waters on Monday. The flotilla was originally slated to arrive in Gaza on Saturday but faced several delays because of technical difficulties.

Like the Tundra Tabloids said, these morons are genocide enablers and not humanitarians. KGS