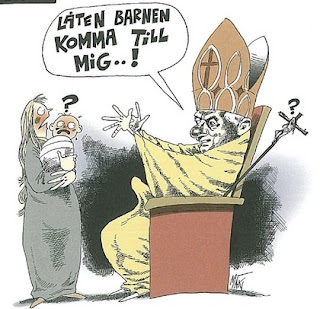 “Let the children come to me”

Here is the reasoning why these Finnish Swedes, and socialists in general, treat Muslims one way, and the rest of us in another way. It’s all about demographics and nothing to do with wrong or right, or even equality for that matter. The socialists here in Europe have institutionalized the systematic treatment of its citizens and residents in an unequal way.
Oh just wait until this minority reaches critical mass you bunch of bozos, then you’ll witness the paradigm in reversE, with Islam maintaining its self perceived right to be protected against any kind of criticism, all thanks to their socialist enablers. That’s their legacy (the socialists and pseudo conservatives) to future generations.

On a side note, I find it interesting that the ring leaders in this story are ethnic Finns whose parents most likely immigrated to Sweden before they were born. Kjell Nilsson-Mäki, the artist who drew the drawing, has a hyphenated name, “Mäki” is a Finnish name meaning hill, and Daniel Suhonen.

Another interesting note is the Catholic response, with the church’s press officer Maria Hasselgren, defending free speech. Who emphasises that Catholics are a minority in Sweden, and still Muslims, who a minority as well, would never have been targeted.
So you see through the lie Maria, the mantra of “minorities deserve protection”, in reality, only goes to those groups that the socialists are rooting for and are busy cultivating their votes for themselves, and threfore are desevered of “special protection”, the rest can just fend for themselves.

This shows just how corrupt the socialist system that’s founded on identity politics is. The big difference between the statists and the lovers of liberty and limited government, is that former seeks to control the levers of power to expand government, manipulate society, and pitt one group against the other in order to foster unrest (to keep themselves in power) all the while pretending that they actually care for the little guy, while the latter seeks to secure individual liberty, limited government, hold all to be equal under the law, and let voter satisfaction to keep them power. KGS

The Social Democratic Youth make the Pope into a pedophile.
The drawing, published in the latest issue of SSU-newspaper cross draft has been sent to the Chancellor.
– It’s distasteful, “said Maria Hasselgren, press officer for the Catholic Church in Sweden.
In the latest issue of SSU’s Journal of Cross-Draw is a caricature of the artist Kjell Nilsson-Mäki, where the Pope reaches out to a baby and says:

“Suffer the little children come unto me”. During which the Pope’s clothes can be clearly seen that he has an erection.
Daniel Suhonen, editor of the Transverse Tensile, explains that it is not meant as an indictment of the Pope.
– It’s a hard political conspiracy against abuses in the Roman Catholic Church, “he says.
“Not a vulnerable group of people”
Suhonen believe that freedom of expression shall be inviolable, but would not have reasoned the same way if it were Muslims rather than Catholics.
– In Sweden, Catholics are not a vulnerable group of people. But Muslims are a group that are vulnerable to Islamophobia, ” he says.
“Good to the test”
Maria Hasselgren, press officer for the Catholic Church of Sweden, reacts strongly to the picture.

– It’s very uncomfortable when the head of our church is made like this. I get very upset, “she says.
The image is at odds with the SSU’s political line, like Hasselgren.
– The majority of Catholics in Sweden belong to a socially vulnerable group, many are unemployed and are modern Swedes. This kind of image makes them extremely offended and hurt. SSU to provoke people who are largely under their own electorate feels a bit strange, “she says.

John Ingerö, editor of the liberal society magazine Neo, has notified the publication of JK.

– It’s all very well to test this, Daniel Suhonen says .
FACT: Lars Vilks’ drawing of Muhammad as roundabout dog from 2007 has created protests from governments in the Middle East and Reinfeldt forced to step in and mediate.
Several people have been arrested on suspicion of a murder plot against Vilks, who has also received death threats, been attacked and subjected to attempted arson.
Muhammad cartoons published in 2005 the satirical drawings of Muhammad in Danish newspaper Jyllands-Posten, which among other things, alluded to terrorism. The publication led to loud protests from the Muslim world. Signatories were threatened murder and one of them was also assaulted.