Skip to content
Home
/
2010
/
May
/
27
/
Immigration
/
TUNDRA TABLOIDS WAS RIGHT: NEW SWEDISH REPORT ON SWEDISH ATTITUDES TO IMMIGRATION FLAWED…….
Facebook
Twitter
Google+
LinkedIn
Pinterest
The Tundra Tabloids posted the other day on an article by “The Local”, concerning a report published by the SOM institute concerning Swedish attitudes to immigration. The article reported that the SOM institute found that Swedes had an overall positive approval of immigration in Sweden.
The TT stated in the same post that: “The Tundra Tabloids trusts lefty academic researchers as far as it can spit, which isn’t that far.” Well now that wisdom has been proved correct, the figures were indeed fudged to produce the results that they wanted. KGS 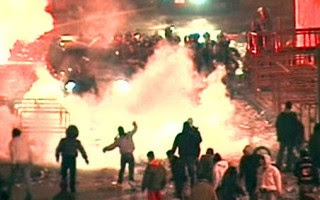 With blazing headlines such as “Swedes increasingly favorable to immigrants ‘, the slush old media is now presenting its interpretation of the periodic survey of Gothenburg University SOM institute makes the Swedes’ attitudes towards immigrants and immigration. As usual, half-truths and misinterpretations of the figures which form the basis for wartime headlines.
Both SvD and DN claim that this year’s research again shows that Swedes are increasingly in favor of pay each year billions of dollars for the dubious pleasure to see Rosengard burn, see serious crime increase and see Sweden slowly but surely turning into a Muslim caliphate.
But if one reads the figures without the pink sunglasses of political correctness on, you can see that the values compared are derived from 1993 when the investigations began. DN writes for example, as the survey in 2009 shows no significant change in attitude since the previous year. How can you argue that the Swedes’ attitudes become more positive this year? As always, half truths and deliberate misinterpretations to convince people that major changes have occurred.
The questions raised by the SOM Institute is generally incomplete and, of course, gives the answer you want. This example is very much the question of religious freedom. The support for immigrants’ religion has not changed since 1993, and today still believe that around 40 percent of which comes from another country must have full freedom to practice their religion in Sweden. Strangely, it would be otherwise, we do have a statutory right to pursue (and avoid) religion in Sweden.
But why does it not matter how much acceptance there is a totalitarian ideology and violence, glorification of Islam? Media’s “interpretation” and related titles as usual reflects a false way to present this year’s survey, the same thing happened last year when the headlines were similar, although all values remained at almost exactly the same level as they did the past few years.
They want to portray that to the Swedes year after year are becoming increasingly positive to see their country being raped, but it’s not at all. Swedes are more positive now than 1993? Yes. Swedes are more positive now than they last five years? No, because title is setting and the content of these articles nothing more than the usual lie signed politically correct old media. We can for example note that the 2009 survey shows that 1% more than 2008 Swedes think it’s a good idea to receive fewer “refugees”.