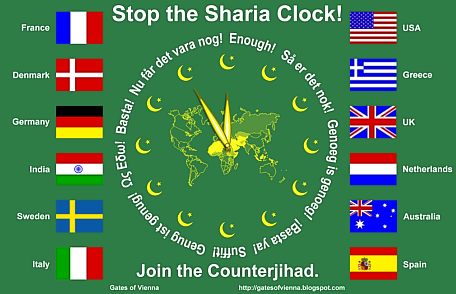 There have been some who have complained about the self described “counterjihad” as being nothing more than the exact opposite in the extreme to that of the actual Jihad. According to this meme, both camps, in relation to how Islam is to be understood, are the exact mirror image of the other, both are held to be “extremist” in their interpretation of Islam.
According to this understanding, scholars of Islamic texts and history, like Robert Spencer, Ibn Warriq, Bill Warner, Wafa Sultan, Dr.Andy Bostom etc. etc. just to name a few, as well as those of us in the blogosphere and activists elsewhere who make up the counterjihad, are supposedly aiding and abeting the jihadis because we are in fact calling a “spade a spade”.
Are we in the counterjihad in fact hurting or helping the situation? Should we act like the those in the Obama administration and refrain from making any kind of connection between Islam and the terrorism created by the adherents to that ideology, or accurately describe these events in the best way we know how, truthfully, matter of factly, which means looking to the Islamic sources from which these jihadis draw their authority?
Personally, I don’t know of any other logical way to combat a menace such as the Islamic jihad, other than to first properly define what it is, where does it draws its validity or strength from, and to stunt and/or limit its success until an overwhelming force can be mustered to deliver a devastating blow.
IMHO, if we were talking about a minuscule number of followers in a death cult, lets say a thousand, ten thousand, or even a hundred thousand plus, this whole debate more than likely would not be taking place. To the overwhelming majority in societies around the world, it would be a foregone conclusion that the followers of a such a totalitarian cult (regardless if all the members were “true believers” or not) who in fact support the over throw of existing government systems, the subjugation of all non-believers, advocate a draconian moral code and unethical “justice” system called sharia, would be hunted down and imprisoned everywhere they were found.
What if we were talking about National Socialists (and yes Communist Socialists would be an equal example as well) who numbered into the hundreds of millions around the world, would we be as wrong in describing their ideology/creed as accurately as we do the totalitarian Islamic creed? I think not. The only way to mount a proper offensive against a cunning enemy, is to understand the enemy’s ideology and then to discredit it.
Lying that Islamic texts do not in fact encourage jihad against the non-Muslim is foolishness, because they do encourage such behavior, and no Islamic cleric, with standing, is going to say differently for to do so they place their own lives in jeopardy.
Those who are blaming the counterjihad for calling a spade a spade, are actually misunderstanding the situation themselves, for mainstream Islam validates what they (the jihadists) are doing. Those of us in the counterjihad serve a purpose in warning the powers that be of exactly what mainstream Islamic thought and teaching allows for, and condones.
People who say otherwise are just being naive, for while there are in fact, “mild Muslims”, a mild Islam has yet to be created, and it’s highly doubtful one can be created, this doctrine is so deeply rooted in Islamic core texts as well as the Sunna of Muhammad that it is extremely hard to see how this can ever be changed, whether it be Sunni or Shiia, and saying so is not being intolerant, its being realistic and it’s a must. KGS
NOTE: Please be reminded that this touches only upon the violent jihad, the stealth jihad is even more dangerous and cunning, and deserves every bit of exposing to its traditional Islamic underpinnings as well.