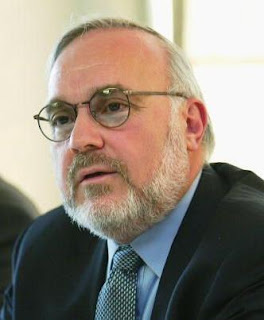 Another, “peace flotilla”, laden with construction supplies, medicine etc., is being planned to set sail for Gaza once again, the only problem with that is, besides breaking the blockade, they’re trying to paint a picture that it’s the Israelis to blame for it, not Hamas itself.

Sending in building supplies sounds like a great thing right? Well the only reason why none is being allowed in, is that it’ll go into repairing and strengthening Hamas’ terrorist infrastructure, not private homes and public buildings, or at least a good sized portion of it will be siphoned away from housing projects etc..

I like what Rabbi Cooper has to say here, he makes some real good points, and to bad the media can be expected to turn a deaf ear to them, choosing rather to concentrate on the hyped up propaganda nonsense of the anti-Israel NGO’s. That’s what will happen, mark my words, no one will be asking why is it these people are not holding the ruling power in Gaza responsible for the screwing over the Arabs who live there.  KGS

Israel should counter ‘anti-siege’ ships with flotilla of inconvenient truths

If all goes the way sponsoring NGOs planned it, a nine-ship armada of activists will steam into a small Mediterranean seaport to break the “siege” of Gaza. Timed for the slow news cycles of the US Memorial Day weekend, organizers, led by “peace crusaders” from Turkey, Ireland, Sweden and North America will unload 10,000 tons of construction material, school and medical supplies.

The organizers are not surprised that Israel has already notified the Irish, Turkish and Swedish ambassadors that the flotilla will not be allowed to disembark in Gaza. They are probably counting on it so they can YOUTUBE images to the world of the Israel Navy’s barbaric maneuvers to thwart the SS Rachel Corrie, named for the anti-Israel American activists dispatched by the Palestinian-led International Solidarity Movement to Gaza.

She died needlessly and tragically “confronting” an Israeli bulldozer in 2003 -another useful martyred poster child for “peace and justice.” So what can be done to thwart this cynical exercise from reinforcing the dominant narrative not only in the Arab and Muslim world, but in mainstream Western media, that Gaza is “under siege” by callous Israel?

For starters it can tell an indifferent world what actually entered Gaza legally from Israel just this last week of the “siege”: 637 truckloads, consisting of 14,069 tons of humanitarian aid.

In addition to that, 781 medical patients and accompanying individuals from the Gaza Strip crossed into Israel to receive treatment in various hospitals and 191 staff members of international organizations crossed into the Gaza Strip, and 202 crossed back from Gaza.