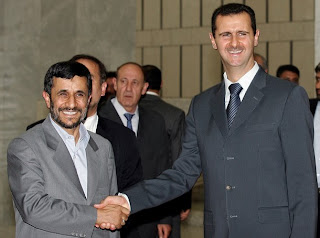 Dinnerjacket & Ass-ad:
Thank’s Putin ol’buddy!
The Russians, Iranians and the Syrians smell blood in the water, Obama is preceived as the wimp that he is so they up the ante once more. Mark the Tundra Tabloids’ words, it’s all going to fall upon Israel’s own shoulders to take care of the Iranian nukes, and international condemnation be damned. KGS
Hillary Dillary in action: Clinton: Iran requires sanctions Secretary of state says Security Council making progress on sanctions.  TT:What an utter failure of a foreign policy.

Russian official says warplanes, artillery, air defense on the menu.
Russia will supply Syria with warplanes, artillery systems and anti-aircraft missiles, Mikhail Dmitriyev, head of the Russian Federal Service for Military-Technical Cooperation told media Friday night.
Israeli officials reacted angrily to the news, Reuters reported.
“Syria at the present time cannot afford to pay for this sophisticated weaponry, indeed, it has hardly enough money to buy food for its citizens. One can only wonder what is the real reason behind this dubious deal,” an unnamed government official in Jerusalem told the news agency.
Israel and Russia have already been at odds in recent years over Moscow’s pledge to provide Iran, another Israeli enemy, with the advanced S-300 air defense system. Though the order was placed in 2007, none of the systems have been delivered, allegedly due to technical glitches, though many believe the delay stems from international opposition to the sale.