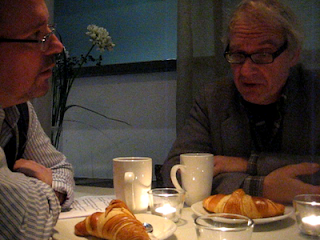 The TT and Lars Vilks in 08′ Stockholm
The true face of the Musulman is in how quick they’ll react with intimidation and threats of violence. Lars Vilks has now been, not only the target of an assassination, physically assaulted, had his website hacked and now he has a facebook threat against his life as well. The man is a modern day hero, and deserves every bit of our support!
And all he’s did to gain their rath, was to draw Mohamed’s face on a dog, and show a picture of Mohamed as a gay man. The Muslims are now seething, and Vilks is busy sharpening his ax. KGS 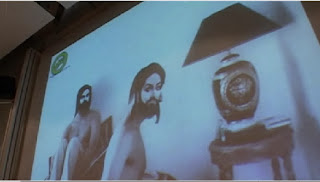 The website of artist Lars Vilks was hacked on Wednesday, just a day after the 53-year-old was attacked as he gave a lecture at Uppsala University.
Instead of gaining access to the artist’s controversial drawing of the Muslim prophet Muhammad as a dog, which sparked outrage in parts of the Islamic world after its publication in Swedish newspapers in 2007, visitors to Vilks.net were greeted by a message from a hacker with the signature Al Qatari.
An aggressive greeting charging the artist with “still talking about the Prophet Muhammad”, is followed by a warning that the site will remain a target.
“We really never stop hacking your site and I will show you how can I hacking your computer.”
Lars Vilks was seemingly unperturbed by the cyber attack.
“I’m in touch with my webmaster, so I hope it will be fixed soon. But in any case, this is better than starting fights at academic lectures,” Vilks told news agency TT.
[…]
A new group on social networking site Facebook entitled “Mörda horungen (Lars vilks)!!!” (‘Murder the son of a bitch (Lars vilks)!!!’) had attracted hundreds of followers by Wednesday before becoming a private group and removing the word ‘murder’.
In March, an American woman known as “Jihad Jane” was charged by US authorities with conspiring to kill Vilks after seven suspected co-plotters were arrested in Ireland.