Skip to content
Home
/
2010
/
May
/
13
/
Danish People's Party
/
DANISH FOLKE PARTY DRAWS AWARENESS TO THE FOLLY OF THE GREEK BAILOUT…….
Facebook
Twitter
Google+
LinkedIn
Pinterest
EU EPIC FAIL! More Europeans up in arms over the extent of the proposed Greek bailout. The Finnish “Right-wing” government was yesterday defending its role in wanting to “save” Greece. Watch the wide spread recession come anyway, because of the ‘aiding’ of Greece. KGS 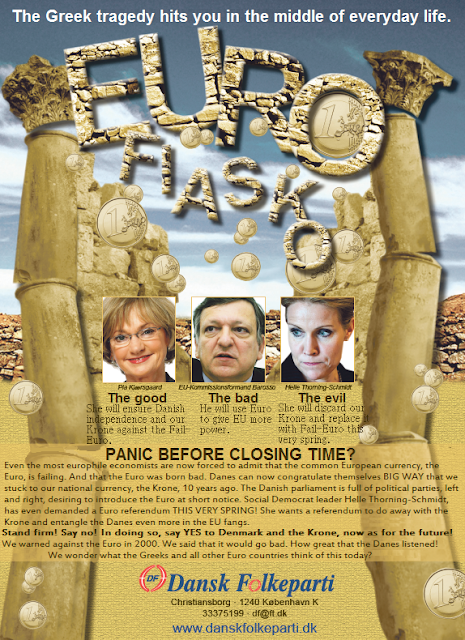 Thanks to Henrik for the translation of the poster. Check out his article at europnews on the same subject: “Saving Denmark from Greece”
Related: Ordinary people know that there is a problem. They understand it when I use an euro and say: “Need to spend it while it’s still worth anything”. Read the poster’s full text below the fold.

Translation of ad follows:
The Greek tragedy hits you in the middle of everyday life.
EURO FAIL
Pia Kjærsgaard
The Good
She will ensure Danish independence and our Krone against the Fail-Euro.
EU Commission chairman Barosso
The Bad
He will use Euro to give EU more power.

Helle Thorning-Schmidt [Social democrat chairman]
The Evil
She will discard our Krone and replace it with Fail-Euro this very spring.

Even the most europhile economists are now forced to admit that the common European currency, the Euro, is failing. And that the Euro was born bad.

Danes can now congratulate themselves BIG WAY that we stuck to our national currency, the Krone, 10 years ago.

The Danish parliament is full of political parties, left and right, desiring to introduce the Euro at short notice. Social Democrat leader Helle Thorning-Schmidt, has even demanded a Euro referendum THIS VERY SPRING! She wants a referendum to do away with the Krone and entangle the Danes even more in the EU fangs.

Stand firm! Say no! In doing so, say YES to Denmark and the Krone, now as for the future!

We warned against the Euro in 2000. We said that it would go bad. How great that the Danes listened!

We wonder what the Greeks and all other Euro countries think of this today?