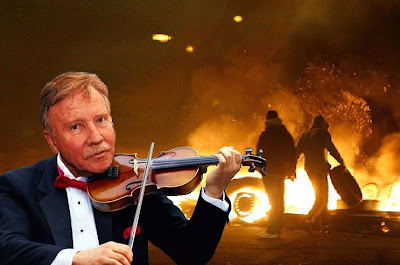 Mayor Ilmar Reepalu: I just can’t figure out why outsiders
are interested in the exodus of Jews and a few charred cars?
The Tundra Tabloids visited Malmö Sweden a little over a year ago, and can testify to the fact that the city is full of scars from all the burning that goes on due to active ”youth” involvement. The police and fire fighters are sick to the stomach with it all, and as the video portrays, (scroll down to the bottom to view) the they are pretty much demoralized because of it. The TT was doing the filming and ESW was asking the question, in the hope that they would divulge something revealing.
What we got were are group of Swedish cops showing how sick and tired they are of it all, that is a story all by itself, the fatigue of those who protect the city from harm. How much more can they stand before they start to look for employment elsewhere, or before they become more aggressive in their law enforcement? Here is an excellent post by the Sweden, Israel and the Jews blog on what’s been taking place over the last few days. The TT also reccomends the GOV post as well. KGS

Emergency Meeting Today Due to Continuous Arson Attacks in Rosengård

Malmö has become internationally infamous recently due to the rising number of anti-Semitic hate crimes which emanate from a fraction of the city’s Muslim population. The Malmo municipality headed by long term Social Democrat mayor Ilamar Reepalu has been large indifferent to this negative development.
In Malmö, the majority of Muslim immigrants reside in one city district known as Rosengård. During 2008 and continuously during 2009 daily violent assaults against the Swedish authorities took place in the neighborhood. Today an emergency meeting is being held by the Swedish authorities as a response to the many arson attacks that Rosengård has experienced, and which show no signs of abating.
Arson has become part of the daily life for the residents in Rosengård. Many of the fires are set by torching cars in underground parking garages. Firefighters and rescue workers cannot enter this part of the city without police escort—this makes the area dangerous not only for the authorities, but also for the local inhabitants due to the lawlessness that prevails.
Just during this year, the local newspaper Sydsvenskan reported that Rosengård has been struck by some 25 arson attacks in underground garages. Sydsvenskan today adds this report:

Last Saturday firefighters received an alarm that two cars were on fire in an underground garage in Rosengård. Arriving on the spot, firefighters noted that there were two fires inside the garage, separated by some 100 meters. The police secured the location of the fire but were pelted with stones. After a while the situation became more strained.
-“We were given indications by the police that we should leave”, stated Southern Rescue Team Commander Torbjörn Krokström. At 00:52 the Southern Recue Team left the garage in accordance with their own guidelines for dealing with risks of violence. The fire was extinguished at that time and four cars had been destroyed. Due to the stone throwing, the rescue team was not able to stay behind for [site] control and airing of the garage.