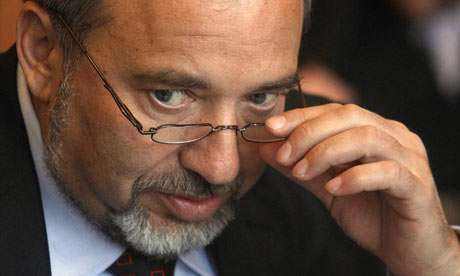 Israeli FM Avigdor Lieberman: Well they’re not
shipping kitchen appliances to the Syrians!
The Axis of Evil, as George W.Bush correctly labeled them (and was mocked for it) is still actively pursuing their deadly agenda of aiding the global jihad while creating an intolerable scenario in the ME. Iran, N.Korea and now Syria, in which the latter is picking up where Iraq left off, are playing a deadly chess game with the re-arming of the Hizbollah Nazis. Israel has every reason to be concerned over N.Korean arm shipments to Lebanon via Syria, with the N.Koreans building a nuke facility that was destroyed by Israel, and its sinking of the South’s naval vessel, the rogue state is showing itself to be a serious threat. KGS

JERUSALEM (AFP) – Israeli Foreign Minister Avigdor Lieberman on Tuesday accused nuclear power North Korea of supplying Syria with weapons of mass destruction.
Lieberman’s office quoted him as telling Japanese Prime Minister Yukio Hatoyama at a meeting in Tokyo that such activity threatened to destabilise east Asia as well as the Middle East.
“The cooperation between Syria and North Korea is not focused on economic development and growth but rather on weapons of mass destruction” Lieberman said.
In evidence he cited the December 2009 seizure at Bangkok airport of an illicit North Korean arms shipment which US intelligence said was bound for an unnamed Middle East country.
Lieberman said Syria intended to pass the weapons on to the Lebanese Hezbollah militia and to the Islamic Hamas movement, which rules Gaza and has its political headquarters in Damascus.