So someone from the religion of peace got upset over the graphic content and went beserk, so why is that not surprising? Thankfully Lars Vilks is all right, bruised, but all right. KGS

H/T Vlad. and thanks to Ted Ekeroth for translating the article. 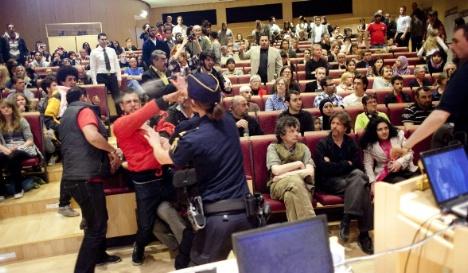 Police pepper spray the perp in the face!
The kid with the fro in the white vest was shouting allah akbar

(The above pic is from Steen) 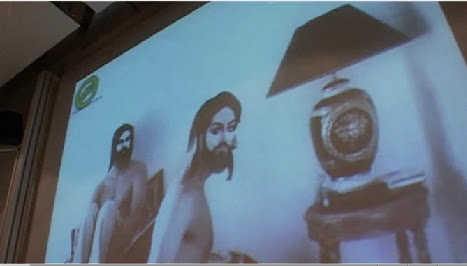 THE PICTURE THAT SET THEM OFF!!!!!!!
GAY MEN WEARING MO’S FACE

The artist Vilks was attacked by a man on Tuesday in connection with a seminar on art at Uppsala University.
The athmosphere was at the beginning calm, Uppsala nya tidning reports. When Vilks showed a movie with sexual content the athmospehere became tense.
– The man in the first row suddenly rushed towards me. He gave me a “Danish,” [dansk skalle” when hitting someone on the head using your own head] and I hit the wall and dropped my glasses, Vilks says to TT.
Uppsala nya tidning photografer, that was on the scene, describes the situation as extremely harsh/tense.

The man belonged to a group that tried to distrub the seminar according to Vilks. Vilks was taken to safety after the assault.
– I’m not injured, just a bit bruised.
The seminar was broadcasted by Upsala Nya Tidning on the net.
The group that the man belongs to were muslims says Vilks.
TT: How do you know that they are muslims?
– They shouted “Muhammed, Muhammed”, says Vilks
He says that the pandemonium was still going on around 18:00. The seminar was about Vilks own art projects and the subject of art and freedom of speech.
– My seminar in Jönköping was stopped before I could hold the session, and now it happened here. I am being stopped by physical violence, and I think its problematic if a mob is in charge, he says.
The police were watching the event. A police officer was assulted during the pandemonium.
– A crowd rushed forward. When a police tried to stop them he was attacked. As of now, two persons are in custody, says Tommy Karlsson, commanding officer at the police in Uppsala county.
The two arrested are persons in their twenties, Uppsala nya tidning reports. A third was taken into custody for “disturbing the peace”.