Skip to content
Home
/
2010
/
May
/
10
/
Austria
/
INTERESTING DEBATE IN AUSTRIA CONCERNING ISLAM……..
Facebook
Twitter
Google+
LinkedIn
Pinterest
Intersting debate happening in the Austrian media over the rise of Islam, the latest round of discussions touching on Islam, goes to Andreas Unterberger. He’s got a good head sense on the problems surrounding Muslim immigration and the inability of it to intergrate into Western society. Thanks to Reinhard for the H/T 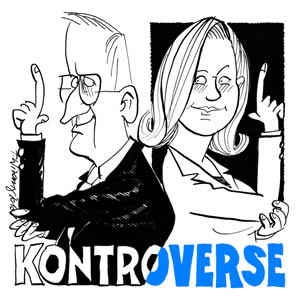 Andreas Unterberger, 1995-2004 editor in chief of The Press, then from 2009, chief editor of Wiener Zeitung and Catherine Krawagna-Pfeifer, editor of the Salzburger Nachrichten, later moving to the domestic policy department director at the Standard, in a controversial debate on the issues of Austria.
Is rapidly growing Islam – a threat?
The trust is lacking
By Andreas Unterberger
Since in the big cities in Austria every fourth child is a Muslim, since it is clear that Islam will be the largest religion of the country in 2100, a critical look is urgently at the place. Instead of comforting ourselves that Muslims believe in one God.
A critical view shows that Islam is a completely different religion than today’s Christianity, Judaism or Buddhism. It is in its main features, a totalitarian religion (as was the Catholic and Protestant Christianity from the Middle Ages to the Enlightenment). It does not know the separation between church and state, as we know it (except for some cultural groups such as the crosses in the schools or the ringing of the bells). It does not recognize freedom of religion, i.e. the right to change from Islam to another religion. The Koran has a hard-discriminatory rules for dealing with non-Muslims.
In none of 50 countries with an Islamic majority, has it achieved anyuthing close to our liberal democracy. Where should we take as confidence that one day this country will be different, even though Islam is in the majority? Turkey, too – which is still the most advanced – has a long list of shortcomings: the prohibition of an Orthodox seminary to the position of the imams as state officials.
And in Austria the Islamic religion is already teaching some shocking things, like that you cannot touch a woman’s hand.
Gewiss: Know that there are some modern Muslim intellectuals who create the image of a tolerant Euro-Islam. But there are no signs that they could ever dominate the majority of European Muslims. What therefore can not destroy the suspicion that our core values here waiting for a foreign religion in peace and quiet it until it represents the majority.

Afraid to eat together
By Krawagna-Pfeifer
Fear in politics is a bad advisor. Who can follow her tendency to excessive reactions that lead to that cause and work of problematic developments in a society not properly analyzed and found as a result of little meaningful solutions.
In this context, the question of whether the “rapidly growing” Islam is a threat in Austria, in its generality, because it suggests the one-dimensional perception of the target population as a fundamentalist movement in the negative. It is a closer look and to gather facts in order rules to allow for a conflict-free coexistence of majority and minority populations.
Currently, about 400,000 Muslims live in Austria (population share of 4.9 percent). Where there are large differences among them. Represented they are “officially” by the Islamic Religious Community in Austria (IGGiÖ), which is not recognized by the Turkish-Islamic Union. According to the company, with 75,000 members the largest association of Muslims in Austria. Besides plants, the Austrian Islamic Federation, which the fundamentalist Saadet Partisi is near, the Turkish Union of Islamic cultural centers, the governing body of the Bosnians, the Federation of Alevi and the Shiites. The different groups have different perceptions of their religion, with fundamentalist views are represented as well as tolerant, liberal-secular, so similar to the Christian faith community.
The former, it is with all democratic means to fight. The second – and hopefully larger group was – and is not a threat. Not even for those who see behind every corner of the decline of the West.