Pastor Henri Rémy: I don’t care who or what
worships there, as long as I get the place filled
Lessons in lunacy by the Christian Left
How to turn a beautiful church from this 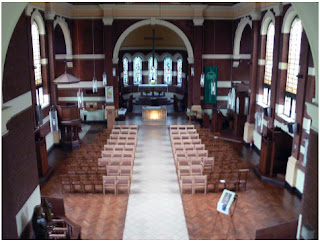 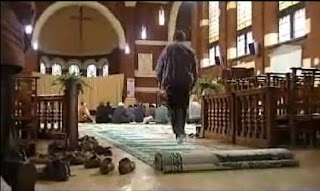 How much longer before they demand the removal of Christian symbols?
Thanks to Islam in Europe and the Sheik for posting on this, it’s another sign of Christian Europe driving a stake through its own heart. The 89 year old pastor, Henri Rémy should think of retiring before he does even more damage to his cause, that is if he still belongs to it, all signs point otherwise.
It’s sad to see, but post-Christian Europe is handing over the rope which will be used to hang it, with Musulman laughing all the way. The Left has destroyed much of Europe’s Christian heritage and willing to sell the rest for the price of propping whatever’s left of its socialist utopia. The Sheik nails it:

For some, the Catholic church has gone off the deep end. In the West, Christian clerics suck up to Islam, in Muslim occupied countries churches are being desecrated and the preachers killed….

Read it and weep. Better yet, read it and get real angry, and demand an end to the nonsense, the socialist state and the multicultural stupidity that’s nothing more than a euphamism for the colonization of Europe.  KGS
Belgium: Catholic Church hosts Muslim prayers

For the past two weeks, the worshipers from the Gilly mosque in Charleroi, Belgium, managed by the Ak-Touba associations, were left without a place of worship. After leaving their first mosque, on Bois de Lobbes in Gilly, which became too small, the association moved into a hangar in Ransart. But that was closed down for municipal and security reasons.
Mohamed, a worshiper in the area, says that the city of Charleroi gave them a hall in the Montignies-sur-Sambre area, but that this quick solution could only be temporary.
And now, until May 15th, it’s the Catholic Church of Saint Lambert which is hosting the Muslim worshipers.
The church priest, Henry Rémy (89), says it’s a natural gesture towards believers, and that he would be happy if he saw as many people in his services as he did in the Muslim services.
Opening the church of Saint Lambert in Jumet to Muslim worshipers was done with the agreement of the Dean of Gilly. The situation is greatly appreciated by the Muslims of the Ak-Touba association.

NOTE: You can bet that it’s appreciated.