This is an interesting case. The Finnish capital’s newspaper, the Helsinki Sanomat, refused to print the dreaded Danish cartoons of Mohamed when the storm surrounding them first erupted, regardless of the well documented reasons as to why they were published by the Jylland’s-Posten in the first place, but had no problem whatsoever publishing the above cartoon by Pertti Jarla in his “Fingerpori” comic strip.

The cartoon was published a week ago last Friday, and pulled from the Internet this past Tuesday. What’s in question here is a cartoon which failed to deliver the artist’s meaning behind the drawing. Fortunately, the Finnish public reacted strongly to the drawing, as they should have, but interestingly the paper eventually pulled it from its Internet pages with the cartoonist issuing an apology which was published today in the HS, viewable here at the Ilta-Sanomat. 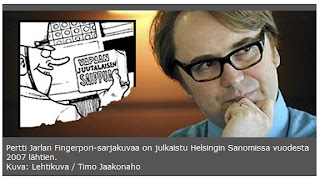 Pertti Jarla: “The inability to see something humorous is in my opinion a healthy and understandable reaction. My intention was to find black humour in a situation where Nazi Germany tries tragicomically to be ethical in a modern way. The purpose was not to belittle the horrendeousness of the issue, but on the contrary to play with conflict of the horrible issue and everyday mundane things [such as soap].”

Taking on the subject of the Jewish Holocaust is always difficult due to the immense tragedy surrounding the German National Socialists’ extermination of European Jewry, Jarla’s chief sin here, is his failure to deliver the exact point he was trying to make. His apology only compounds his original failure (drawing a cartoon to easily misunderstood) by once again failing to be clear, so what’s the point in drawing the cartoon in the first place if it’s so difficult for him to deliver its meaning a second time?

NOTE: The TT inquired about it from someone belonging to the Helsinki Jewish community; “It does give ammo to the Jew haters, it can be understood to also mean: Jew-free soap, which would make more sense actually …. even though its cruel. It doesn’t make sense, it’s in bad taste and the word play is to complicated to understand. So as a Finnish/Jewish reader it’s in bad taste, but I wouldn’t pull it.”

UPDATE: Think animal rights or a green product. Here’s some background. This cartoon is in light of a series of reports in Finland about animal rights in Germany and how they are all upset about the bad mistreatment of animals. This is a play on how the German society today is more concerned about the ethical treatment of chickens, than German society was about the Jews in the 30′ and 40’s. He’s defending the Jews, not mocking them, calling the Germans out on the carpet and calling them hypocrites.

Kumitonttu adds: “I think the artist plays with Finnish language and we should understand the text as “Jew-free soap”. I also think that the artist has a point. For me it looks like he tries to compare the time in Nazi-Germany to modern days.

If I’m right, he tries to compare how a modern West tries to emphasize that a CO2-free products are more favorable than oil-produced goods. If I’m right, again, he says that the Greens ideology is as disastrous as the Nazi-German socialism was. And in that respect I think he hits the point.

What makes the case tricky is that by withdrawing the strip we have no chance to discuss about its theme. Instead of carrying its responsibility as a reliable forum for current topics, the newspaper tries to wipe out the dust under the carpet. Like the three monkeys – do not hear, no dot speak, do not see. ”