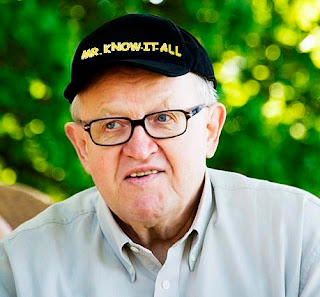 Goober Ahtisaari: I’ll put MCI’s
best minds on the problem anyways
Eh… thanks Goob, but the best thing you can do for us in your golden years, is to go prune your garden and fertilize the lawn and keep your hacks from screwing things up even more. The world is full of these “do gooders” and the path of destruction is paved with their good intentions. The Israelis don’t need any of their meddling, if they want to do something positive for the region, they needn’t sett up shop in the Arab states, but in their own capitals and lobby their governments to stop wasting money on the Palestinians Fakestinians.
More money is lost down the black hole of Arab corruption and in the terrorist infrastructure, than goes towards building its society. Regardless of what Ahtisaari says about CMI not spearheading any kind of peace initiative, his CMI team of Finnish “officials, advisers and university personnel” are going to pressing flesh and giving all the wrong signals to the potentates of the region.
The Tundra Tabloids has met, and has had run-ins with many of his like minded fellow travellers at the Finnish UPI and at the Finnish Foreign Ministry (from which the CMI receives half of its funding), and they all fail to impress. Having a superficial knowledge and revisionist understanding of the region (from reading all the works of Avi Shlaim and ilk), are the qualities CMI expects from the people it employs and associates with. So unfortunately, expect to see the CMI sticking its nose where it shouldn’t, regardless of what their leader says. KGS
Mr Ahtisaari headed organization to set up an office in the Middle East