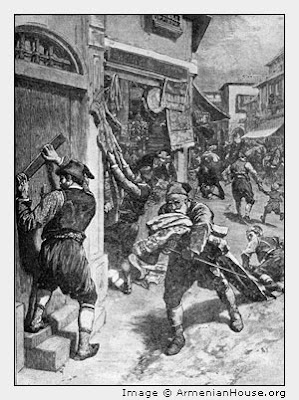 ISLAMIC LOOTING
The way Christians as a minority are being treated in many Muslim lands today, is the exact same way Jews were treated by Muslims and Christians over the centuries. Any minority living amongst an Islamic majority, whether it be a Christian, Jew, Zoroastrian, Deist etc., always lived at the whim of which ever Muslim ruler or town chieftain happened to be ruling at the time.
It never made sense for Christian rulers in Europe throughout the centuries to have anti-Semitic policies while they knew for a fact that their co-religionists fared just as badly at the hands of the Musulmen. They had plenty examples of fellow Christians being treated as a second class citizens, fearing for their lives, as well as being victimized for whatever reason schemed up by the Muslim society in which they lived.
Christian Europe has since that time strove against traditional forms of anti-Semitism, and that’s a good thing, but they still have a long way to go, seeing that their anti-Semitism has morphed to include an irrational hatred for the Jewish state of Israel. But what is also interesting is Europe’s “working relationship” with Muslims in the ME, which has never translated into an improvement in the welfare of their co-reigionists who live in Arab/Muslim lands.
Though Christians live freely in Israel, practice their faith and live as equals, the Jewish state is singled out (targeted) by Europe for a whole host of supposed offenses, while Christian minorities in Muslim lands are being depleted of their numbers, being driven out by anti-Christian policies and the turning of head. Christians will continue to be persecuted throughout the ME as long as European leaders lack the spine to addressing their plight, as well as the plight of the Jews.
Taking a firm stand for Israel and for Christian minorities in the Muslim ME/and elsewhere, is the only way the EU can have a positive effect on the region, its continued appeasement will only encourage the same type of behavior that is driving out Christians from every corner of the Levant, as well giving them reasonable hope that Israel can indeed be destroyed. KGS

NASHVILLE, Tenn. (BP)—A Christian in Pakistan’s southern Punjab Province was murdered March 9 for refusing to convert to Islam. Rasheed Masih, 36, allegedly was killed with an ax by six Muslim neighbors who reportedly were business rivals.
The six men were charged with torture and murder and an investigation is underway, but the suspects have not been arrested, the Compass Direct news service reported.
Iqbal Masih of the Church of Pakistan told Compass Direct that Rasheed Masih and his brother Asi had been under constant pressure to recant their faith in Christ and become Muslims. Their constant refusal “gradually turned into enmity,” Asi Masih said. The police report two of the suspects had made threats of “dire consequences and death” for six months prior to the murder.