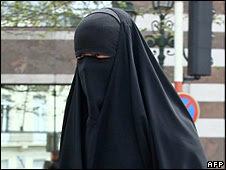 Oh rats, they nabbed me!

A woman visiting a post office in Novara, north-western Italy, has been stopped by police for wearing an Islamic veil covering her face.
A police official told the AFP news agency the woman would have to pay a 500-euro (£430) fine.
It is the first such police action since Novara brought in a by-law in January banning clothing preventing immediate identification in public.
The city is run by the anti-immigration Northern League.
The party is a powerful junior coalition partner in Prime Minister Silvio Berlusconi’s national government.
‘Not tolerated’
Novara Mayor Massimo Giordano said the by-law was meant to deter women from covering themselves with the veil in public.
“But unfortunately it is apparently not yet clear to everyone that clothes preventing the wearer’s identification can be tolerated at home but not in public places, in schools, on buses or in post offices,” he said, according to the Italian state news agency Ansa.
“There are still some people that refuse to understand that our community in Novara does not accept and does not want people going around wearing the burka.”
He said the by-law was “the only tool at our disposal to stop behaviour that makes the already difficult process of integration even harder”.
The woman, described as a Tunisian national, was apparently visiting the post office with her husband when she was stopped by police.
When her husband refused to let her be identified by male officers, they called in a female colleague, AFP reported.