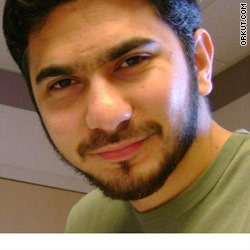 Faisal Shahzad: Mohamed
would have been proud of me

NEW YORK (AP) – A Pakistani-born U.S. citizen was hauled off a plane about to fly to the Middle East and arrested in the failed attempt to explode a bomb-laden SUV in Times Square, authorities said Tuesday. One official said he claimed to have acted alone.
Faisal Shahzad was on board a Dubai-bound flight that was taxiing away from the gate at Kennedy Airport when the plane was stopped and FBI agents and New York Police Department detectives took him into custody late Monday, law enforcement officials said.
U.S. authorities “will not rest until we have brought everyone responsible to justice,” Attorney Eric Holder said early Tuesday, suggesting additional suspects are being sought. No one else has been taken into custody, an official said.
President Barack Obama said “hundreds of lives” may have been saved Saturday night by the quick action of ordinary citizens and law enforcement authorities who saw the smoking SUV parked in Times Square.
“As Americans and as a nation, we will not be terrorized. We will not cower in fear. We will not be intimidated,” Obama said.
Shahzad, 30, had recently returned from a five-month trip to Pakistan, where he had a wife, according to law enforcement officials who spoke to The Associated Press on condition of anonymity because of the sensitivity of the investigation into the failed car bombing.
Shahzad became a naturalized U.S. citizen last year shortly before traveling to Pakistan, a federal law enforcement official in Washington said, speaking on condition of anonymity amid the ongoing investigation.
Investigators hadn’t established an immediate connection to the Pakistani Taliban—which had claimed responsibility for the botched bombing in three videos—or any foreign terrorist groups, a law enforcement official told the AP.
“He’s claimed to have acted alone, but these are things that have to be investigated,” the official said.