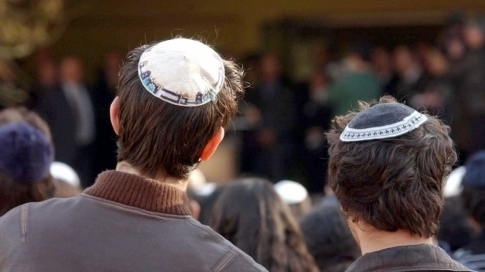 A Tundra Tabloids’ correspondent sends the following report about a Jew was stabbed by an Arab in Strasbourg just because he was wearing a kipa/yarmulke.

The man, about forty years, has been attacked with knives at 12:30.
A man aged 42 years wearing a Jewish kippa, was violently assaulted on Friday 30 April, in the center of Strasbourg. He was wounded from two stab wounds by two assailants, “said Pierre Levy, delegate of the Representative Council of Jewish Institutions of France (CRIF) in Alsace. This confirms the information relayed in a first time on the website of the Latest News from Alsace. “It is indeed an anti-Semitic attack,” he said.
The Haaretz reports:
A practicing Jew was hospitalized with serious injuries after being attacked with a knife and iron rod in the center of Strasbourg, the capital of the French Alsace region, media outlets reported on Friday. According to eyewitness reports, the 42-year-old man was wearing a traditional Jewish skullcap when he was attacked by two men wearing djellabas, robes traditionally worn in North Africa.
One of the men hit the victim in the back with the iron rod, while the other wounded him in the chest with a knife, media reports said. One of the attackers was reportedly mentally deranged. The motive for the attack was not known. But a representative of the umbrella association for Jewish organizations in Alsace, Pierre Levy, called the incident a “serious anti-Semitic act.

NOTE: Every time an Arab/Muslim commits a violent act, you can be assured that the media will (a) be unsure about the motive and (b) be sure to report that the person committing the act was mentally unbalanced.