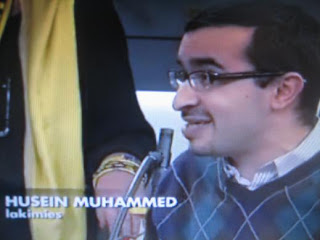 Husein Muhammed, a Kurdish lawyer, former  refugee, and now naturalized Finnish citizen, is a very articulate speaker and very popular with the political and media elite. He’s also an active member of the Finnish Greens party and maintains a blog in Finnish where he posts on a frequent basis, including aticles he has had published in the Finnish news media.
In a recent article published in the Helsingin Sanomat, and republished here at his blog, Husein Muhammed sets his sights on the political conflict surrounding both Islam itself, Islam in Europe, as well as on the radical supporters of traditional Islam and on those who oppose them. While the Tundra Tabloids greatly appreciates his modern rejectionist thinking on sharia law, he nonetheless holds some very disturbing, and dangerous views that seems to have gained traction in some circles in the West.
Writing in yesterday’s Helsingin Sanomat, 27.04.10, Husein Muhammed juxtaposes what he deems (wrongly) as two equally opposing sides, of radical, sharia loving “Islamists” and the radical “Far-Right”, (a euphamism for Fascists and Neo-Nazis).

Husein Muhammed: “At first sight, one would think that the anti-West Islamic extremists and Western xenophobic right-wing extremists are each other’s worst enemies. The extreme right claims that Islam is a threat to Western civilization, while the Islamists consider “Western cultural imperialism,” the main threat to Islam and to the culture of Muslim countries. [..] Anti-Muslim sentiment has the same features as anti-Semitism before the Second World War.

Anti-Muslim right-wing extremists and anti-Western extremist Islamists, however, have some sort of unholy alliance between them. They enhance each other’s support and reinforce each other: for example, the radical Islamists, through terrorist attacks will increase prejudice and outright hatred towards Muslims. This also applies to those Muslims who do not have anything to do with the attacks and who condemn them clearly.

Attacks will increase the support for the openly anti-Muslim right-wing extremist parties and movements in the Western world. These movements incite hatred towards all Muslims, which may also lead to the radicalization of the western-minded Muslim moderates. This increases anti-Western Muslims, while anti-Muslim sentiment becomes widespread among Westerners.”

As the Tundra Tabloids has pointed out time and again, the Left loves to disown their own ideological cousins that the TT properly labels, the Ultra-Nationalist Neo-Fascist Left, as well as hide the fact that the UNNFL are as aligned with the same supporters of traditional Islam as are the Multicultural Transnationalist Neo-Communists.

Just the other day the TT posted about a Scottish Leftist who openly admitted just that: “This does not mean that Marxists and Islamists cannot or should not work together on particular issues when, as is often the case, they share similar immediate aims. But each should remember that their ultimate aims are very different.” 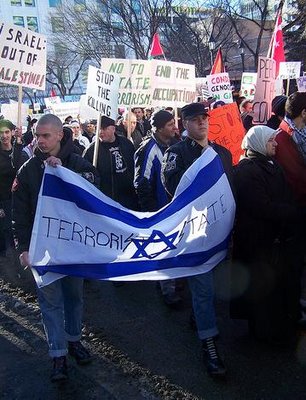 [The idiots in the picture march with an Israeli flag besmirched with an SS, while sporting the same symbol on their jacket lapels. No one ever said they were the sharpest knives in the kitchen drawer.]
Just like the Neo-Communist Left, the Neo-Nazi Left are aligned with the Muslims and Islam for similar reasons and goals, they loathe the Jews and want to see Israel destroyed. In no way can anti-Islamization activism be compared with what Jews experienced in National Socialist Germany, to even suggest such a thing shows the superficiality of the argument.
While there may be pockets of hard core Ultra-Nationalist Neo-Fascist Left-wingers who may be against everybody not like themselves, including Muslims, the overwhelming majority of those who are against the Islamization of Europe and the West, do so out of the justifiable fear of that Islam itself, which has proven very resistent to moderation and change, is threatening our liberal, democratic values and way of life.
The signs are all around us, whether it be halal being forced upon non-Muslim school children in Belgium, or restuarant chains in France, or Muslim hospital staff being exempted from rules of hygene in the UK or seperate “Muslim only gender apartheid” swimming periods in public pool halls in Finland. This is something Husein Muhammed chooses brush over, and instead, paint every person who actively organizes a movement to counter Islamization…as a Neo-Fascist thug, (mislabeled as “Right-Wing) though all the evidence points to the contrary.
But there’s more!

HM: The extreme right and Islamic extremists do not want any good relations between Muslims and Westerners. Indeed, Islamists are afraid of – or at least claim to fear – the Muslim religion and culture to lose economically and technologically to the overwhelming Western culture. Extreme right in turn, induces fear that a strong Islam and strongly growing Muslim populations are overriding European culture and Christianity.
Both extremist groups popularity are based on the maintaining and strengthening the polarization of the Mulsim and majority population. Their dream of a world, or a part of it without Muslims or Westerners, however, is not realistic. Western democracy, technology and popular culture are spread all over the world.
Muslims can not maintain and develop their own culture, religion and society from closing out Western influences. Muslims would realize the best objectives, if they would take from others – both Westerners, Indians and Chinese, for example – good influences, while preserving what is best for their own traditions.

To claim that we in the counterjihad do not want good relations with Muslims in general, is ridiculous, first and foremost, we want to be left alone, and any individual Muslim, like Husein Muhammed, who is against both types of jihad, violent and stealth, as well as against sharia, are more than welcome to live as equal members in society as anyone else. The mass immigration of tradtional Islamic minded Muslims however, is an entirely different situation altogether, it’s sad to see H.Muhammed make no such distinction. Why is that?
Husein Muhammed will have to also consider the reason why no one is looking at the Chinese or Indians etc., as a threat, that perhaps it just might be because their culture allows them to adapt to the host society they immigrate to, as opposed to the Muslim coming directly from the Middle East? Perhaps it’s also the fact that Turkish, Morrocan, Algerian political leaders  are telling their expat countryman not to intergrate themselves, maybe that’s the reason why many of us are worried over the success of Muslim intergration as well as the fact that increased Muslim intergration corresponds to a drastic increase of anti-Semtism.

How about that Husein Mohammed, did you ever think about that? Why is it that Muslims are over represented in prison, that it’s normal for a Muslim to hold anti-Semitic views and that European Leftists turn a blind eye to it all while seeking yet more Muslims to immigrate into Europe? HM shoudld  answer those kind of questions for a change instead of cahsing phantioms or trying to find an easy scapegoat. KGS