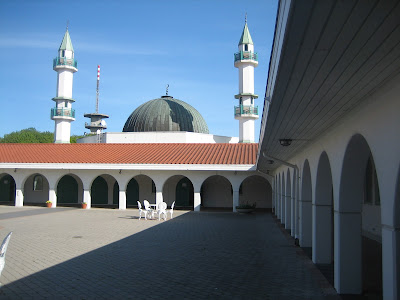 Malmö Mosque
(Picture taken by Tundra Tabloids in May 2009)
Over at the excellent blog, Sweden, Israel and the Jews, we receive word that the city council of Malmö hasn’t had its fill yet of radical Islam, so it’s ordering up a brand new Islamic center that’s being billed by the municipality as a “leisure center”, so they say it shouldn’t be confused as a Mosque, in spite of the fact that:
“according to the blueprints of the center–which will be able to host some 1500 people–about half of its 2 500 square meters (nearly 27,000 square feet) are dedicated to a two-story prayer hall.”
According to SIJ blog, the scheme behind the new “leisure center” was cooked up by the by the Islamic Belief Association in Scandinavia (Det Islamiska Trossamfundet i Skandinavien (DITS), which is known  for its support for the late Palestinian imam (Abu Laban) who spread the flames over the publication of the dreaded Mohamed cartoons throughout the ME, as well as adding a few other pictures to the mix which were not included in the Jyllands-Posten’s publication.

Sweden, Israel and the Jews:

The Belief Association in Scandinavia also cooperates with the Islamiska Kulturföreningen (Islamic Cultural Association) in Malmö, also known as the Abu Bakr As-Sideeq mosque. This is the same association which in 2009 had one of its branch mosques closed down by the Swedish Secret Police (Säpo) for preaching radical ideas. In this mosque one can frequently hear the preaching of Anas Khalifa, also known as Abu Malik, from Gothenburg’s Bellvue Mosque. Anas Khalifa has been connected to Muslim Internet sites which preach Islamic messages of hatred and Jihad . He is also known for preaching Muslims intolerance towards Christians and Jews, and is a follower of the fundamentalist Salafi movement, whose exponents include the members of al Qaeda.
The project leader for the new “Islamic Center”, Khalil Assi, is a board member of the Islamic Belief Association. According to the blog Muslimska Friskolan, Assi has publicly promoted Jihad against both Israel and Denmark. He has also been a chairman of the Islamic Belief Association in Denmark where he worked together with the radical, shahid-promoting Imam Abu Laban.
The head of Malmö’s only official mosque Bejcat Becirov welcomes the new project. According to him, the new mosque is not seen as a competitor:-“There are around 60,000 Muslims in Malmö today and our facilities are insufficient”.