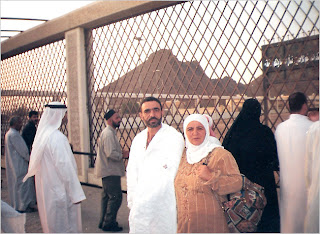 Ali Sibat: I forgot that the Koran
was the Saudis’ constitution
And the soft headed Leftists in the West want to be compasionate towards those who would destroy their society. Well, we should just send them all packing to SA to witness that state’s justice in the raw. If not for Western influence, this Lebanese magi would have already had his body divorced from his cranium months ago. Remember folks, there’s no outrage in “da kingdom” over the planned beheading of this guy, for them, this is business as usual. KGS

CAIRO —
For more than two years, Ali Hussain Sibat of Lebanon has been held in a prison in Saudi Arabia, convicted of sorcery and sentenced to death. His head is to be chopped off by an executioner wielding a long, curved sword.
His crime: manipulating spirits, predicting the future, concocting potions and conjuring spells on a call-in television show called “The Hidden” on a Lebanese channel, Scheherazade. It was, in effect, a Middle Eastern psychic hot line.
“Sorcery is the ability to influence matters that affect people’s lives through the use of spirits,” said Abdulaziz AlGasim, a retired Saudi judge. “It is impossible to prove such an act except through confession, and confessions are suspect.”
The authorities say that Mr. Sibat confessed.
Several times in recent months, Mr. Sibat’s lawyer, his wife and his four children were told he would, any day, be escorted to a public square for his beheading. And several times, the execution was postponed after an outcry from international human rights groups and the Lebanese government.
Mr. Sibat’s odyssey through the Saudi justice system began in 2008, when he traveled to the kingdom to perform what is called an umra, or a minor pilgrimage, in the holy city of Mecca. He was arrested in a sting operation staged by the religious police, men with long beards and ankle-length gowns who technically have no authority to arrest but who wield tremendous power in the conservative kingdom. He was jailed after agreeing to give a woman a potion so that her husband would divorce a second wife.
The religious police said they recorded the transaction.