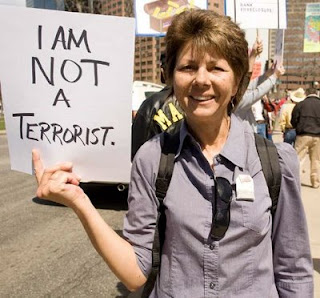 The US Main Stream Media has been spreading over the past year the meme that the Tea Party movement contains “dangerous elements” of sedition and support for violence, and therefor the leaders of the movement have to be held accountable in advance for any potential outburst of violence that has yet to happen.
Since the left leaning media is for big government, and the Tea Party movement, which demands a smaller role for government, will be something that they (the media) will naturally loathe, and they mean to show it.
So bad has the Tea Party movement been for the MSM, who up until a year ago, almost completely ignored the movement, and then when that huge conservative elephant could no longer be ignored, they took disparaging it, like linking Timothy McVeigh to the people rallying in the streets demanding that their elected representatives respect the US Constitution.
In other words, these people have no problem with US government which guides itself according to the US Constitution, just with the people currently in charge who are using their own guidebooks to run the government straight into the ground.
The mind of the Left is a mish mash of contradictions, what else can explain their pride in participating in violent anti-war protests?  KGS

On Monday, the Christian Science Monitor bucked its mainstream peers by reporting something truthful about the TEA party movement: police officials have begun to relax security requirements at conservative rallies because of the remarkable absence of violence.
Yes, you read that right: despite nonstop media warnings about hateful protests, violence from TEA party attendants is so nonexistent that police feel safe allowing them to bring large items and sometimes even guns.
The Monitor was compelled to check things out when a TEA party in Raleigh, North Carolina, persuaded officials to overturn a ban on flag poles. Such items are typically banned because a flag pole is really just a very big stick that could be used as a weapon. The Monitor’s research led the paper to admit that conservative protests are far less threatening than many past demonstrations.
Patrik Jonsson’s article drew a refreshing contrast between violent rallies of the Vietnam era versus the new model of peaceful civil uprising:
To be sure, permitting rules and police preparedness are often developed based on past behavior at various kinds of protests. Many go back to the 1960s and 1970s when violent rallies erupted over the Vietnam War. Such protests sprung up again during the presidency of George W. Bush, when protesters clashed with police in New York City and elsewhere during large-scale demonstrations against the Middle East wars. With tea party rallies so far proving more orderly, police have given them more latitude.
This flies directly in the face of Speaker Nancy Pelosi (D-Calif.) comparing TEA parties to California in the 1970s – and that of MSNBC’s Keith Olbermann comparing them to Selma during the fight for minority civil rights.