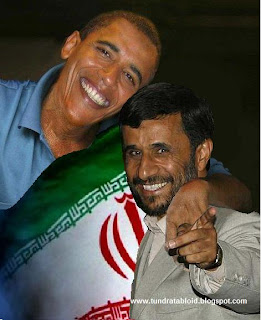 Obama: So much to talk about with so little chance of success
Moody: You said it Hussein, we’ve got time to burn and fat to chew
Obama is going to use the Iranian threat as long as possible to try and get major concessions from J’lem, it’s bound for failure, but that’s the game this idiot is playing. It’s the state of Israel who’s sitting in the Iranians cross hairs, and Zero is using it the best way he can, calling for more talks and sanctions that he knows the Chinese will never sign on to.
We very well could see a conflagaration flare up in the up coming months ahead, perhaps even this year, and it’s all going to fall on Israel’s shoulders to carry it out. Israel is going to have to act on its own if it wants to derail the Iranian nuke program, they simply do not have any other choice, Obama and the State Department are seeing to that. KGS

US: Iran strike ‘off table’ for now

SINGAPORE — The US has ruled out a military strike against Iran’s nuclear program any time soon, hoping instead negotiations and United Nations sanctions will prevent the Middle East nation from developing nuclear weapons, a top US defense department official said Wednesday.
“Military force is an option of last resort,” Undersecretary of Defense for Policy Michele Flournoy said during a press briefing in Singapore. “It’s off the table in the near term.”
The US and its allies fear Tehran is using its nuclear program to build arms. Iran denies the charges, and says its program only aims to generate electricity.
“Right now the focus is a combination of engagement and pressure in the form of sanctions,” Flournoy said. “We have not seen Iran engage productively in response.
Iran has rejected a 2009 U.N.-backed plan that offered nuclear fuel rods to Tehran in exchange for Iran’s stock of lower-level enriched uranium. The swap would curb Tehran’s capacity to make a nuclear bomb.