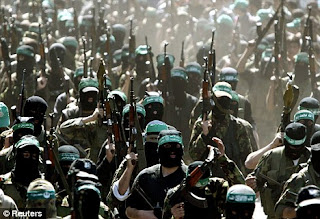 We retain the right to shoot anyone we want
That’s what the Left usally does anyways, close their eyes or worse, blame the Jews for whatever the Arabs do to themselves and to Israel. It’s a well worn out game, the Arabs consistently reject to end their conflict with Israel, ramp up the violence when they spot an opportunity, and cry victim when Israel responds. The European Left, and now Obama and his minions, can then be counted on to blame the Jews for something the Arabs started and then cry foul when they refuse to commit national suicide by insitituting self defeating “compromises”.
So instead of demanding from these Arabs complete adherence to signed agreements, ending terrorism and the funding for it, as well as dismantling the entire terrorist infrastructure and ending incitement against Jews and the state of Israel, the Left looks the other way…towards the Jews. So Amnesty International has opened its mouth about the summary executions, oh well, so what, the TT will only begin to take notice when they mount a serious h.r. campaign against the Hamas. Until then, they’re just trying to appear “balanced” and are not serious. KGS

NOTE: Take note off the Hamas not being confused at all about what “jihad” means.

Hamas vows to keep up executions in Gaza Strip