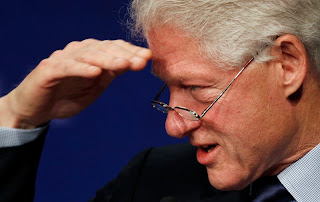 Slick Willy: What about Waco?
Who’s asking that question?
Bill Clinton may try to play dumb, (easy for a real dummy) but he can’t hide, not with the watch dogs out there holding his feet to the flame. The man’s an immoral letch, serial liar, and rather good at the drive-by smear, and because the media is dishonest as well, they’ll let him get away with it time and again.
One interesting note, when Bill Clinton came to Finland in 2006 to speak in Tampere, on…..”leadership”! At the Tundra Tabloids thought it to be a joke, but then it became an even bigger joke when it became known that the organizer failed to fill enough seats (only 700 showed) and ended up taking a loss, or hardly any profit at all.
But it doesn’t stop there, Slick Willy was not even seen by the Finnish President during his entire visit, in spite of the fact that she was in town. But when US comic,tv talk show host, Connan Obrian came to Finland, he was granted a private audience, how fitting is that? KGS