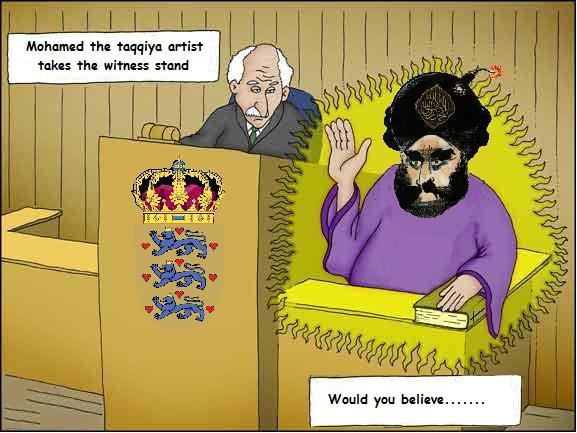 MO IN THE DOCK

Pamela Geller from Atlas Shrugs and head of the SIOA, was sent the following backgrounder and letter to the Saudi law firm outlining the lawsuit, from Hans Erling Jensen, Founder of Eticha. Here is information about the organization from their own website:

“A virtual think tank about multiculturalism in Denmark. Eticha is independent of party politics and religious affiliations. Eticha is a virtual network where a variety of active individuals contribute knowledge and other resources on a case by case basis. We are always interested in involving new persons and new ideas.

While our politicians with their usual lack of proportions keep discussing halal food in schools, burqa, niqab and hijab, the fragmentation of our societies continues apace. This is described in detail in the book “Et delt folk” (“A Divided Nation”, published summer 2008) by Morten Uhrskov. In spite of the general openness of Danes, the launchers of Eticha are not yet seeing the necessary debate of Denmarks future “in the light of change”.

We believe the ‘caleidoscopical’ composition of society – multiculturalism – makes it difficult to formulate new visions acceptable to everyone. The number of people who doubt the ability of politicians to direct developments in our common interest is ever increasing.

We no longer believe that the current societal structure can be preserved, due to the extensive demographic shifts taking place in Denmark and in Europe. In order to uphold a workable society, we all need to follow the same rules and take part in contributing to the community.

What we need is a plan for action!”

According to Pamela Geller: “The following is the primer, the template on which to forge ahead. Clearly Armenia, Bosnia, Batak, Darfur, Nigeria, and all the countless genocides committed in the name of allah and jihad must be redressed as well. Legal minds, start your engines. Robert and I of SIOA, Anders Gravers of SIOE, and Siad strongly support this action.”

Thanks to Geller and Spencer and Hans Erling Jensen, Founder of Eticha, for bringing this interesting and timely lawsuit against the Saudis, Mohamed and his supposed descendants. Kudos. KGS
Eticha informs lawyer Faizal Yamani of upcoming lawsuit against Muhammad’s descendants Supported by a number of Danish and foreign associations, the virtual network Eticha is planning to sue the Muslim prophet Muhammad’s descendants, the group preparing a libel case against a number of Danish newspapers.
Background
It all began when Jyllands Posten in September 2005 published the now famous Muhammad cartoons. After half a year of boycotts, flag and embassy burnings, and various diplomatic crises between Denmark and the Muslim countries, we thought it was over. But no, nay, never! In the spring of 2008 the CIA revealed a plot to murder Kurt Westergaard – the cartoonist who had placed the bomb in Mo’s turban, and thus created the greatest symbol of “freedom of speech and expression” yet in this century.
The Danish newspapers reprinted the cartoons to show solidarity with Kurt Westergaard, which got the ball rolling. In august 2009, Faizal Yamana demanded an unconditional apology from the 15 newspapers to be published in various media across the world, in four different languages. By reprinting the drawings – and especially that of Kurt Westergaard – the newspapers had, according to Faizal Yamani, made themselves guilty of slander against the Muslim prophet Muhammad ibn ‘Abd Allah al-Hashimi al-Qurashi.
Consequently, Hans Erling Jensen of Eticha.dk, sent his now famous letter to the law firm, where he drew attention to Denmark’s position in history and in the world. But little did it help.
Lawyer Yamani claims to represent 94,000 people, all descendants of Muhammad ibn ‘Abd Allah al-Hashimi al-Qurashi, who demand an apology for the insult (they claim) their ancestor was subjected to by the Danish newspapers once again publishing the infamous cartoons.
Faizal Yamana intends to open a libel case in London against the Danish newspapers. Not that he expects to win it, he is too well educated to even dream of that. On the other hand, he has funding from a very wealthy foundation whose, objective is to protect Muhammad’s reputation at any cost. This libel case therefore constitutes nothing else than economic blackmail. One newspaper, Politiken, has already done the bean-counting, caved, and apologized.
At Eticha.dk, we presented a new plan. Due to Yamanis’ unethical initiative targeting the Danish newspapers, there was an obvious opportunity to countersue Muhammad’s descendants, to one time for all obtain an apology from people as closely related as possible to the source of the outrageous accusations, slander and the consequences of these statements that generations of innocent and defenseless people have suffered for (the Koran). In contrast to Mr. Yamani, we have a solid case, and now we even know exactly who to target with the lawsuit, that we can achieve justice.
As of today’s date, we have sent the following letter to the law firm in Saudi Arabia: