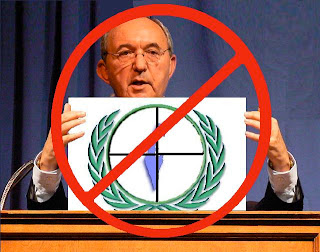 Kapo Goldstone: I just don’t get it?
Jews with stones. Now that’s a synagogue of strong moral character, something of which the Hamas lackie, kapo Goldstone lacks. Not being able to see his grandson bar mitzva’d is a solemn slap in the face that he deserves, for you see, ones actions does carry responsibilities and consequences. Kudos to the synagogue. Mazel tov. KGS

The Jewish official who headed a war crimes probe whose findings infuriated Israel and Jewish communities around the world has been asked not to attend his grandson’s bar mitzva due to be held in Johannesburg next month, according to a South African newspaper.
Judge Richard Goldstone, who led the UN-sanctioned investigation into suspected war crimes committed during last year’s armed conflict between Israel and Hamas in Gaza, will not be in attendance when his grandson performs the religious rite because of objections by members of the community, the South African Jewish Report said.
The South African Zionist Organization (SAZF) and members of the Beith Hamedrash Hagadol synagogue, where the ceremony will be held, raised objections to hosting Goldstone because of his involvement in the committee which found the IDF guilty of committing war crimes and possible crimes against humanity in Gaza.
“We understand there’s a bar mitzva boy involved – we’re very sensitive to the issues;” Avrom Krengel, chairman of the SAZF, was quoted as saying by the Jewish Report.
While Krengel said the SAZF had “interacted” on the matter with the chief rabbi, the Beth Din and others, his organization was “coming across most forcefully because we represent Israel,” the Jewish Report said.