The Tundra Tabloids gets it straight from Pamela Geller:

One of the first projects that we’ve been working on for Stop the Islamization of America and the Freedom Defense Initiative organization that I started with Robert Spencer was a bus campaign to counter the dawah campaign of the Muslim Brotherhood.
For those of you curious as to why we created and organized a bus campaign to offer resources to Muslims who are desperate to leave Islam, I shall explain.
The bus campaigns that Muslim Brotherhood groups (CAIR, ICNA, ISNA) were sponsoring across the country inviting conversion to Islam (dawah) were deceptive and injurious. It was important to counter balance the taqiya with a healthy message ………… So I developed the above bus ad with the help of the enormously talented Big Fur Hat to roll out nationwide, kicking off with South Florida.
Our pro-freedom campaign rolled out today on the following buses all over Miami — Route 3 (Biscayne Blvd and US1), Route 88 (Kendall Drive SW 88th Street, from the Dade and North Metro Rail station to SW 80th street)), 1 on route 40 (Bird Road SW 40th Street), Route L (Hialeah along 79th Street Causeway, Collins Avenue to Miami Beach Convention Center), Route E (Collins Avenue), Route 11 (FIU Bus terminal to FIU South campus, West Flagler street ends at Government center Metro station) — split between curb side and street side.
Here are the bus maps: Download Bus
More here! 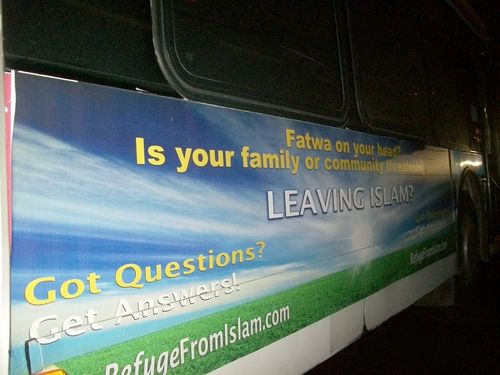