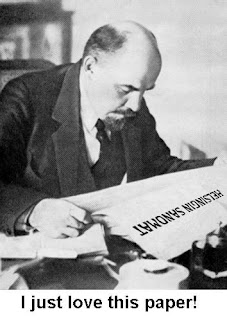 Thanks to Kumitonttu for sending this in, the Tundra Tabloids doesn’t know what it would do without his contributions. The Finnish capital’s daily news rag, the Helsingin Sanomat, (usually not fit for reading, but for placing at the bottom of the bird cage or the wrapping of dead fish) has an excellent piece about the phenomenon of violence being directed at Jewish communities across Europe, especially in Malmö Sweden.
Kumitonttu reminds the TT, that this article hits on a point that this blog has been hammering away on for some time now, that the media’s use of the term “extreme far-right”, (read= Neo-National Socialists) belongs to the ranks fo conservatives has been faulty from the very beginning. The Neo-Nazis are hard core Leftists, and as the report states, they are now forced to admit that the “traditional hard Left” and Muslims, have joined the ranks of (their brethren) the Neo-Nazis in their vitriolic Jew hatred. KGS

In Britain there were recorded 374 crimes , in France 195, 138 in Canada and in the United States, 116.
Statistics showed a clear spike upwards in Austria (22) and in Norway (6), where anti-Semitic crimes in the past have been quite rare.
The statistics which are maintained by the Stephen Roth Institute, took into account crimes upon the person and property, which have clearly visible anti-Semitic motives.
Statistics do not take into account less severe cases, such as libel or property mischief.
Researchers estimate that the main reason for the increase in crimes was the Israeli war against the Palestinians in Gaza in January 2009.
The much received criticism over the attack is not the sole reason for the change, which according to researchers has been observed as a wide trend since the 1990s.
Researchers can see behind the phenomenon  an increase in anti-Semitism.
According to the researchers fed by both historical ignorance of the young, Muslim countries spreading propaganda such as the destruction of the Jews – the Holocaust- being politicized against the Jewish community.
The tension being directed towards the Jewish community, according to the study, is of increased activity of radical Muslims in Europe. When crimes were committed in the past, especially by extreme right-wing supporters, it’s now revealed that the majority of the crimes investigated in Europe, are acts of the extreme left and Muslim youth.
Jews experiencing hatred in Nordic countries, was spoken about last year and this year in the Swedish city of Malmö, where part of the local Jewish community have had members forced to leave the city.
According to the police crimes against Jews doubled last year in Skåne.