So this consumer organization in Sweden chooses to listen to their little “inner dhimmi” and not common sense, and boycott the Jewish state of Israel. What these Swedes are actually saying is, that they’re incredibily pissed off that the Jews refuse to commit national suicide, how dare they not capitulate to the likes of Hamas and Fattah thugs.
What encourages these anti-Semites to even consider such a thing is the audacious behaviour of their politicians, whether they hail from the far Left, to the Right (there isn’t any real conservative right-wing parties in Sweden or in Norway). The present Foreign Minister, Carl Bildt, is a prime example of politicians sticking it to Israel for the pure politics of it all, catering to the Muslim vote has become a regular feature in Swedish politics. KGS
The anti-Semitic chef 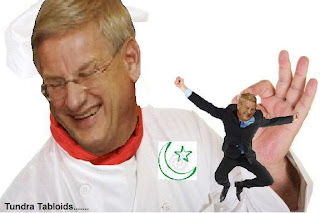 Carl Bildt: Just a pinch of me gets the ball rolling

Published: 11 Apr 10 10:07 CET
A consumer organization in western Sweden with some 350,000 members has called on the country’s Coop supermarkets to stop selling all goods from Israel.
Three resolutions urging a ban on Israeli products were approved by a majority of the 425 members in attendance at Saturday’s annual meeting in Gothenburg of the consumer cooperative society for western Sweden, Konsumentföreningen Väst (KF Väst). The resolutions cited Israel’s role in the Israeli-Palestinian conflict as grounds for a boycott.
“The board will now push the issue of a boycott to the other Swedish consumer cooperatives,” said chairperson Carina Malmer in a statement.
KF Väst is one of the largest of the 47 consumer cooperative societies that make up the Swedish Cooperative Union, which has more than 3 million members.
The Swedish Cooperative Union owns the Coop chain of supermarkets. According to the union’s own figures, the retail consumer cooperative societies and Coop together account for 21.4 percent of the grocery retail sector in Sweden.