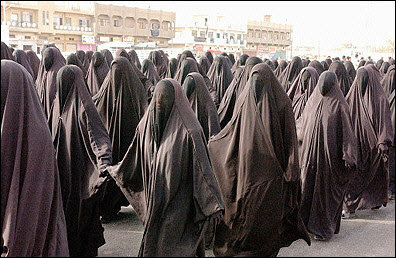 The Tundra Tabloids see lots of fines here
That’s all well and good, the women who sport the bag should be fined, heavily, perhaps 50 Euros per square mtr of clothing, and for repeating offenders, the same fine + civil service, like street cleaning etc.. KGS

Paris, 9 April (AKI) – Italy’s foreign minister Franco Frattini on Friday rejected the idea of sending to jail women who wear the face-coveing Islamic burqa. Both Belgium and France are moving to ban the burqa and the niqab, which leaves only the woman’s eyes visible.
“It’s unacceptable to send women to prison because they wear the burqa in public,” Frattini told satellite TV channel France24 in a interview.
French MPs will on 11 May debate regulating Islamic garments that fully cover a woman’s body and face, paving the way for a likely law banning face-covering veils, officials announced earlier this week.
“When it’s not a personal choice, the veil can be interpreted as an act of submission and therefore as an offence to sexual equality,” Frattini stated.
France has Western Europe’s largest Muslim population, estimated at around 5 million, but only a tiny minority of women wear the head-to-toe Islamic burqa.
France’s conservative president Nicolas Sarkozy has said the burqa and niqab oppress women and are “not welcome.”
Many supporters of a burqa ban say it poses a security risk and deny they’re targeting the garment for its religious symbolism.
Many in the West see the burqa as a sign of male oppression of women.
France banned Muslim head scarves and other “ostentatious” religious symbols from classrooms and public offices in 2004.
Belgium is this month expected to become the first country to outlaw the burqa. MPs are due to vote into law a bill banning Muslim women from wearing the burqa in public places. The Belgian parliament’s justice and home affairs committee in late March unanimously endorsed the bill.