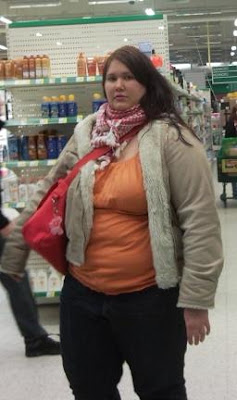 Islamofascism & acid face lifts?
The Tundra Tabloids recently posted a picture of a Finnish state tv morning show host on YLE1, sporting a fashion keffiyeh on her show while interviewing a guest. The scarf, even in its more fashion minded state, is still a political symbol for the Arabs, for which we in the West can correctly label it a symbol for Islamofascism.
Well today the Tundra Tabloids ran into a woman sporting the real deal, who hadn’t a clue that many interpret the rag as a fascist symbol as well as a symbol for international terrorism, the Jihad. The Tundra Tabloids was recently in a conversation with an Israeli who also mentioned that the Arab males who see women sporting the keffiyeh are greatly offended, which of course pleases the TT to no end, but there’s also a matter of safety to consider.
The keffiyeh is something that can only be worn by a Muslim male, and never by a woman unless she is given permission to do, such as in a demonstration. The keffiyeh is never to be worn for fashion, doing so can get a female into trouble. The person with whom the TT was discussing the issue with, told of a circumstance in which a woman was confronted by a female Muslim over the wearing of the scarf because she had two strikes going agianst her, (a) she was a woman and (b) she was a non-Muslim. The woman ended up getting acid thrown into her face.
Lesson here is folks, you better know exactly what you’re putting around your neck, and the risks involved if it’s connected in anyway to the followers of the mad prophet. KGS