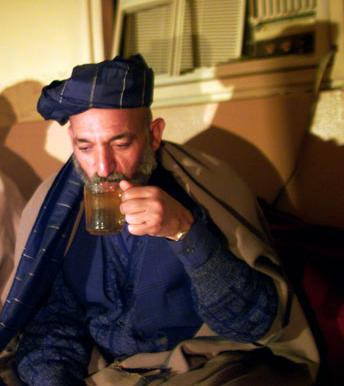 Afghan Pres.Hamid Karzai: I am so screwed
With the US administration hammering the Afghan leader about his corrupted government (it is, badly) the Afghan leader is seeing the writing on the wall. Yes there needs to be a reigning in on the corruption and an end to the government sponsored opium drug trade, but the need to keep the al-Qaida friendly Taliban out of power is a more pressing responsibility.
Obama is blowing it big time, and this debacle is going to follow the US for some time to come, as the Taliban sniffs blood in the water and continues to press the fight forward. Iran is working with the al-Qaida aligned Taliban, so by default Tehran is working with al-Qaida, and that reality should be stressed in the UN Security Council, and accented in its deliberations. KGS 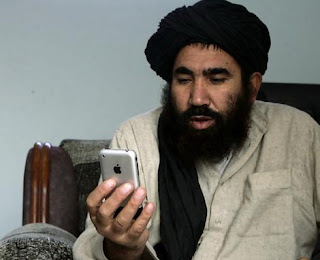 Abdul Zaeef texting Obam’s Blackberry:
Thanks Hussein for all your help

Kabul, 9 April (AKI) – The prospects for peace between Afghan president Hamid Karzai and the Taliban are bleak because the president is “powerless” and the US has “corrupted” the government, according to a former Taliban minister. In an exclusive interview with Adnkronos International (AKI), Mullah Abdul Salam Zaeef, former Afghan ambassador to Pakistan before the US invasion in 2001, was pessimistic.
“Karzai wants to do something but he is powerless,” Zaeef told AKI. “The ministers are not in honest negotiations with the Taliban.”
Zaeef was detained in Pakistan in early 2002 and later transferred to the controversial US military prison at Guantanamo Bay in Cuba, where he was held until 2005.
He said many in Afghanistan were disillusioned with the presence of US troops in their country and identified with the Taliban.
“Who is the Taliban? The Taliban is my son, the Taliban is my brother. What is the difference between the Taliban and me?”
“The real problem is a national problem,” he said. “People want Karzai to do something to guarantee the future for the people of Afghanistan. People feel disappointed with the Americans here, they are really interfering in everything, the government and the system and in the constitution.
“The people of Afghanistan know they are not coming to help them.”

NOTE: The Obama administration is committing the very same mistake the Kennedy/Johnson admin did with, Ngo Dinh Diem, the overthrown and executed leader of S.Vietnam in 1963, after he was deposed, it was the beginning of the end. Yes he was corrupt and hated, but he was feared, and the Vietnamese people honor those whom they fear. Once the feared and admittedly corrupt leader was deposed, the subsequent string of ineffectual S-Vietnamese leaders led to the fall of S.Vietnamese state.
If they would have refrained from undermining Diem for his overt corruption, while lauding his great successes against the Viet Kong and N-Vietnamese regulars, the story might have ended differently. Obama is throwing Karzai under the bus in much the same way Kennedy and Johnson did that led to the eventual takeover by the N-Vietnamese. The Taliban are banking on such a scenario happening.