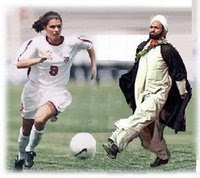 Those evil Zionists and Crusaders 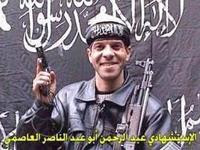 al-Qaida jihadi: No fun, no sports. Ok, I got cha.

Algiers, 9 April(AKI) – Al-Qaeda’s North African branch has threatened to attack the World Cup football finals in South Africa which start in June. In addition to the United States and United Kingdom teams, the teams representing France, Germany and defending champion Italy are also on the group’s list of targets.
“All those countries are part of the Zionist-Crusader campaign against Islam,” Al-Qaeda in the Islamic Maghreb statement published late Thursday in a recent issue of the jihadist online magazine ‘Mushtaqun Lel Jannah’ says.
“How amazing could the match between the United States and England be if, during a live broadcast with a stadium packed with spectators, the sound of an explosion rumbles through the stands, the whole stadium is turned upside down and the number of dead bodies are in their dozens and hundreds, God willing,” the statement says.
The US and England are scheduled to play each other on 12 June in the South African city of Rustenburg.
Al-Qaeda in the Islamic Maghreb says it will use an undetectable explosive that will be able to circumvent security checkpoints.
South Africa announced last October that its security forces had foiled an Al-Qaeda plot to carry out a terrorist attack during the 2010 World Cup.