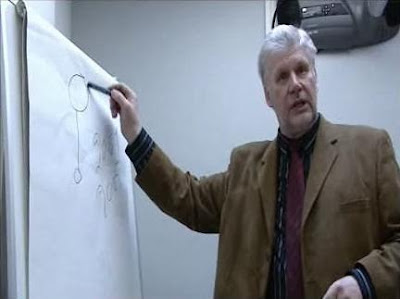 Abdullah Tammi first points out his I.Q.
before delivering his riveting speech to a jam-packed hall
What’s going on? From the looks of things, after being eased out of his position as spokesman for the Finnish Islamic Party (FIP), Tammi is now looking for new relevance, so he’s now taken it upon himself to lead a new party with the Orwellian name, “The Socialist Party of Peace”.
He is also trying to carve out a niche for himself in the anti-terrorism industry, giving a lesson in domestic terrorism to all those who managed (lucky) to find a seat in the crammed hall. Tammi is someone who’s not afraid of wearing a number of differently colored hats, having been through the Communist party, National Socialist party, a number of different Christian sects, fundamental Islam and now Islamic tutor in domestic anti-terrorism efforts.
What a guy, and what a packed hall! 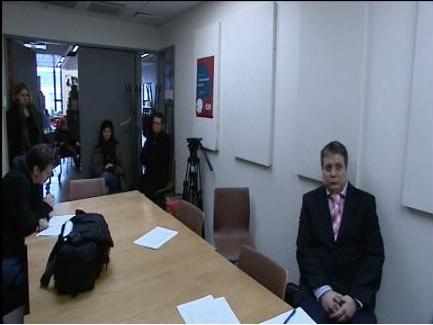 Does Tammi really have a target on his back from his co-religionists, or is it another attempt to reinvent himself in the eye of the public since he got the boot from the FIP?  But who cares, this is comedy at its best, and Tammi and gang delivers it in spades!

H/T: Harri
Abdullah Tammi war of (words) with the terrorists

– A normal Muslim does not accept terrorism, says Abdullah Tammi, who organized a press conference, trying to hit as many flies with one swap.
Tammi who established the Socialist Party of Peace, wandered everywhere in his speech, stating the party’s objectives were addressing peace, terrorism abroad and its potential to radicalize Finns. At times we were in the Finnish forests and at times on the Georgian border.
The monologue moves to the Russian subway and its 17-year-old woman bomber. Tammi presents a theory, according to which young Muslims for example, are shown for educational purposes terrorist videos, and the idea of martyrdom romanticized.
– On morning of Women’s Day, the coverage on a Muslim Internet site called for people to commit terrorist attacks and suggested that all who refrain from participating in the attacks are without religion and outside of Islam. 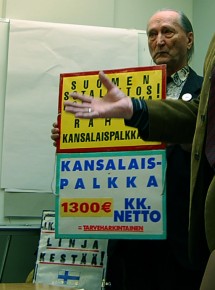 He questioned the calls as anti-Islamic and reitereated that religion prohibits the killing, although Islamic Sharia law has cruel and draconian punishments.
The threat of terrorism in Finland
The Islamic Internet site KavkazCenter is according to Tammi the terrorists’ communication channel, which is maintained in Finland.
Death threats on the website have been made against both him and his acquaintances, a request for an investigation has already been filed with the police.
The press conference turns into a argument between Tammi and the FIP’s former vice-spokesman, Abdullah Rintala.
The party’s internal conflicts that led to Tammi’s resignation from the office of Spokesman in December 2009 still have not been settled.
[…]
In the middle of the otherwise confused event, attention is drawn to a guy standing up next to the speaker with a sign in his hand: Finnish War Department is to be abolished, the money given to the citizens. 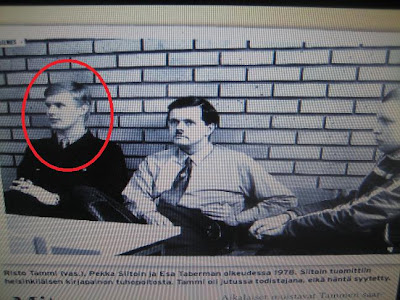 Abdullah Tammi when he was running around with Nazis