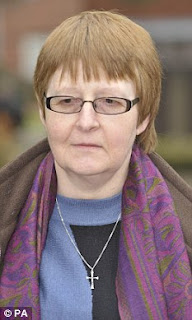 Chaplin: I see that there’s two standards
at play here, one for Muslims and one for us
This is all pure rubbish. The fact that the Hospital stoops to the ridiculous excuse that the cross might cause infection, while doctors hover over patients with their stethoscopes, proves that something isn’t right here. There’s also the false argument that there’s no mandatory requirement to wear a crucifix, which implies by default that the wearing of the hijab is, which is clearly not the case. KGS

The nurse at the centre of a growing storm over discrimination against Christians yesterday lost her fight to wear a crucifix at work. Shirley Chaplin, 54, was told by an employment tribunal that wearing the cross is not a ‘mandatory requirement’ of her faith.
She had been taken off hospital wards and moved to a desk job after refusing to remove the religious symbol. Yesterday the grandmother lost her religious discrimination case against the hospital trust that employed her.
She described the result as ‘a very bad day for Christianity’.
[…]
“The ward sister – who wore the crucifix without complaint over 30 years nursing – had told the tribunal she was ‘forced to choose between her job and her faith’ after being ordered to remove it at a hospital where Muslim staff wore headscarves.”
[…]
‘The evidence we have is that there is no mandatory requirement of the Christian faith that a Christian should wear a crucifix.